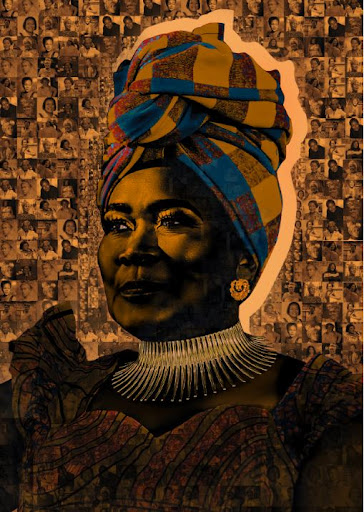 Connie Chiume discarded her high-heeled shoes and tucked her silky, purple dress into her underwear as she prepared to take flight in her first-ever audition. She’d travelled by train across town to audition for the musical Sola Sola after seeing an advert looking for dancers and singers.

“I didn’t even quite understand what an audition was. I arrived there and found all these upbeat people dressed in bell-bottoms and T-shirts, and there I was in my dress and heels because akere I was a teacher,” she recalls. “But I knew one thing: I could sing and I could dance.”

When she finished her audition, they told her they would let her know about a callback. But she wasn’t having it. “I was naïve, because I didn’t know the industry. So I went to them and told them: ‘I need to be told now.’ My being naïve helped me because I was cast on the spot.”

The following day, she went back to the school where she was teaching and resigned. The money on offer also made it easier for her to turn her back on the R70 a month she was earning as a teacher — she’d make R100 a week on a nine-month tour of Greece and Israel with the production.

Resilience and determination are at the heart of the mother of four’s story. After her parents left for her father’s country of birth, Malawi, the then 18-year-old was left to fend for herself. “I didn’t have anyone whom I could ask for a piece of bread… I had to make sure I stood up and did it all myself.”

That was when she enrolled to train as a nurse at Tembisa Hospital, sending money to her parents every month. After she fell pregnant and was expelled from the course, she was forced to come up with a different plan, which was how she fell into teaching, and ultimately the arts.

Four decades after her first audition, the Welkom-born actress is now one of the country’s most recognised and celebrated artists. But if fate hadn’t intervened, she might still have been in a classroom.

“All the time when I was nursing and then teaching, I liked the stage, and I always thought I’d be a musician. I was even composing my own songs,” she says in a WhatsApp call when we chat late one Monday afternoon, South African time. Mam’ Connie, as she is affectionately known, dials in at 11am from the United States, where she is currently shooting Black Panther 2. “I cannot say much about it because we signed NDAs, but I am very proud to be part of this project. It has removed the stereotype that as Africans we are just fighting, we are sick, we have diseases. With Wakanda, we see another type of Africa.”

Her only regret is that she no longer shares a set with the much-loved actor Chadwick Boseman, who played King T’Challa. Last year, Boseman succumbed to cancer. “May his soul rest in peace. He was very nice. He would come to you and ask how you were. He was just that type of person. Even now when you go on set and he’s not there, you just feel like… wow,” she says sombrely.

Despite making a name for herself locally through a solid body of work that includes Porgy and Bess, Little Shop of Horrors, Ipi Ntombi and, more recently, local hit telenovela Gomora, for many, Chiume’s star really shone when she was cast in the ensemble cast of 2018’s Marvel Cinematic Universe’s box office hit Black Panther, where she played one of the tribe elders.

The full impact of how big her role was, was initially lost on the actress. “I couldn’t even remember auditioning for Black Panther. That day, I had been to so many auditions without luck. So, it didn’t click which one it was,” she says, laughing. That she had read for the role under the guise of a production called Motherland probably contributed to her confusion.

“Only later on did I realise that it was a big film that was going to be shot in America. But I was afraid because when they said Black Panther, I thought they were talking about the revolutionary movement.” It was her castmates on Gomora who eventually helped her click. During a lunch break, they asked her about her upcoming project. “I said: ‘I’m going to shoot Black Panther’, and iyhooo, all of a sudden everyone was screaming and on their feet and they showed me on Google whom I was going to be working with. I was just numb.” On that list were Hollywood royalty such as Angela Bassett, Forest Whitaker, Michael B Jordan, and Lupita Nýongo.

With such an impressive resumé, does she feel she’s made it? “No ways, no. In this industry if you feel you have reached that stage, you’re going to remain stagnant. Everything evolves. You have to keep yourself relevant,” she says. “I feel like I am still learning every day.”

Chiume speaks with an enthusiasm and warmth that translates even across a phone line. She punctuates her speech with a throaty laugh, exclamations, and a lot of “yho’s”.

It is probably this unassuming demeanour that has kept the 69-year-old at the top of her game in an industry that is not always kind to those with dreams of longevity, and certainly those of a more advanced age. But Chiume does not let her age get in the way. “I’m in an industry of young spirits, and at home I am surrounded by young people. I had my youngest daughter quite late and I have grandchildren. In showbiz, we grow up, but we don’t get old.”

Gomora dethrones The Queen for the second time

Gomora has reclaimed the top spot as pay broadcaster DStv’s most-watched TV show for the first time since it dethroned The Queen back in April.
Entertainment
1 year ago

As to her future, Chiume has even bigger plans that will hopefully see her pass on some of the lessons she has learnt over her stellar career. She hopes to build an arts school where she can help grow the industry. She already has the Connie Chiume Foundation, where she hosts master classes, while her events and management company organises international gigs for local talent. She counts sending dancers to a major US festival as one of her successes. “I would like for us to build a very strong film industry with new female directors and producers. That’s my dream — to see more of those things happening in our country.”

Much has been said and written about this screen legend, but how would she describe herself? “I see myself as a very determined person. I’m not afraid of challenges. I’m very passionate about my work and what I do. I believe it’s something that was wired into me by the universe, by God,” she says. “I still dream, even at this age. I don’t give up. I keep on walking. When I fall, I dust myself off and continue.” After a pause, she concludes: “When you have a passion, something burning inside of you, you don’t get tired.”