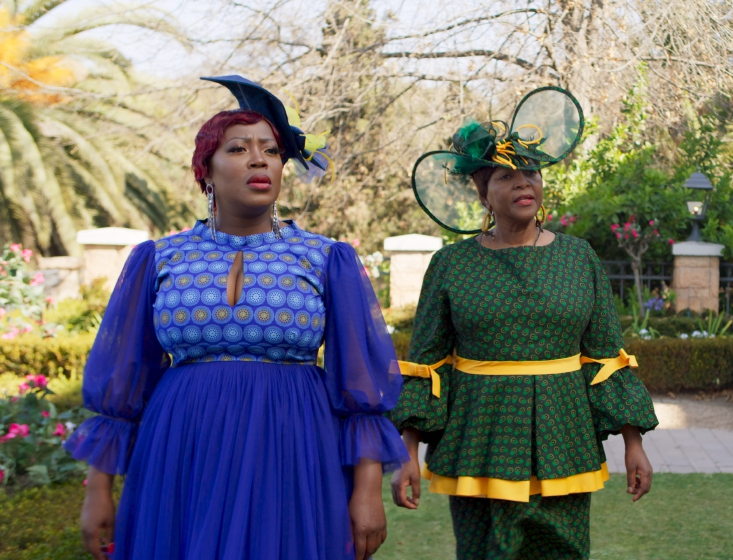 Actresses Rami Chuene and Clementine Mosimane in the 3-part Television series How To Ruin Christmas: The Wedding.
Image: SUPPLIED

It’s no secret that How To Ruin Christmas: The Wedding stole the hearts of many South Africans who have streamed the mini-series on Netflix.

Unsurprisingly the series earned a number of nods at the recent South African Film and Television Awards (SAFTAs) walking away with six awards including Best Achievement in Wardrobe for a TV Comedy.

Speaking to the award-winning costume designer, Sheli Nyathi-Masondo, we find out what went into creating the unforgettable looks that had us hooked to our screens.

Why was it important to work with local designers for How to Ruin Christmas: The Wedding?

I’ve always loved working with local designers for my films because I’m a big fan of their work. Secondly, the big motivation behind it was my celebration of South Africa and its colours, textures, beauty and joy.

Bryantsmoore and Orapeleng Modulte were the go-to designers for the bride’s gowns, what went into creating these looks?

With the Tswana gown (Bryantsmoore) it was quite extensive in design where she could show off as a character. Usually, I put myself in a bride’s shoes – you want a gown that is out of this world.

You have everything in it; tulle, duchess satin, seshweshwe, bows and a train! It also had a trail, sleeves and a neckpiece that were detachable with the mood arc of the actress.

With the second dress (Orapeleng Modutle) it was supposed to be every girl’s dream dress.

It had to have the fantasy of a princess marrying her prince charming. We went into the designer’s space and without having to pick what was on the hanger we pulled elements from different dresses to combine it into one.

Can you run us through the Twala family’s style?

For Vusi (played by Lehlohonolo Saint Seseli) we kept a few of the items international designs which were all of his accessories. When I was talking to Ole Ledimo of House of Ole we wanted him to be westernised but you can still see the township boy coming out in the outfits.

He’s that township boy who used to dream of wearing Italian brands but because of where he is now as a politician he still incorporates his culture. I wanted to also show that he hangs out with our local designers and supports them.

Even if it was too much and over the top, I wanted to show how a lot of politicians are which is in your face.

The two women of the Twala family have a very similar style, was this intentional?

The similarity was intentional because when the daughter in law got into that household she wanted to please her mother-in-law. She is almost a younger version of Valencia.

Valencia is the type of women who also spends her money on Versace and Gucci accessories but the dresses and the shoes are from local designers.

We had Thula Sindi make all of her dresses because she is the kind of woman who goes to Thula Sindi and sits there for coffee while she has her measurements taken. A dress is always a phone call away if there is an emergency and it’s made in her body shape.

Shweshwe print played a big role in the cultural outfits worn by the Sello family. How did you pick their looks?

We all love Shweshwe, it’s a very South African fabric and it has evolved from the old blue and brown. Now it’s colourful and bright so we wanted to showcase that it can be dressed from the eldest to the youngest trendsetter in the family.

The Sello family also got to have fun with fascinators, what advice would you give to those who love rocking the accessory, especially at weddings?

Match it up – there is quite a strong vibe about fascinators right now. There was this shop I found while sourcing in Durban where they can colour-match your fascinator with any outfit.

And what advice can you give to brides planning on tying the knot during lockdown in terms of the perfect gown?

Have no reservations to your dream. It’s probably going to happen once so don’t take shortcuts to achieve the look you’ve been dreaming of.

Any words of encouragement you can give for supporting local designers?

We have the best designers in this country. I had a big pool of designers and it was a pity that I couldn’t use all of them. We have more than enough and there is no better time to use our South African designers than right now.

A-listers who slayed — and those whose fashion choices dismayed — at the 15th SA Film and Television Awards.
S Mag
11 months ago

The designer gave us a sneak peek into his new collection.
S Mag
1 year ago

Striking the perfect balance between luxurious and relaxed is what Nkuli’LL Lux collection seeks for every woman.
S Mag
1 year ago
Next Article