Accused number 10, a fearless and lifelong fighter for freedom 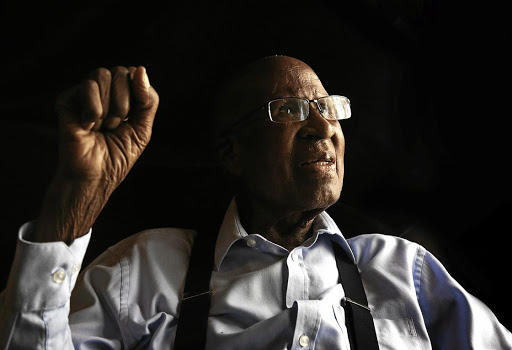 Andrew Mlangeni was accused number 10, the last at the Rivonia Trial.

Although the rest of the accused had decided that Mlangeni and Elias Motsoaledi wouldn't testify as they felt there wasn't much to add to what had already been said, according to Nelson Mandela he made an unsworn statement admitting that he had carried messages and instructions for the uMkhonto we Sizwe (MK) high command.

Born on June 6 1925 in Free State, Mlangeni was raised in Prospect township (George Goch), in the eastern fringes of the city. To avoid deportation to Free State, he would later claim Prospect as his birthplace. A racially mixed freehold settlement, it was a place where Indian merchants and Chinese fah-fee runners lived side by side with African tenants.

In those years black people born in the countryside were regarded as "temporary sojourners" in Joburg.

When Prospect township was demolished to make way for an industrial site in the 1930s, the Mlangeni family was relocated to a new black settlement in the western part of the city. Housing for Africans was a big headache for the authorities as most rural folks migrated to the Reef in search of jobs and the hope for a better life.

By 1932, Orlando East, the nucleus around which Soweto was born, was established by the city council as a solution to the housing problem and slum conditions in places like Doornfontein and George Goch. When more houses became available in 1938, the Mlangeni family eventually moved to Orlando East.

With a large household of a widowed mother and 11 children, life was definitely not easy. Some of the children were taken in by relatives. Andrew went to live in Free State rural townships of Kroonstad and Bethlehem for a while.

His father had passed away when he was five and his mother was a washerwoman for white families. It was against this background of poverty and oppression that his politics were forged.

Struggle stalwart Andrew Mlangeni spent the last few hours with his son Sello, but they could not communicate.
News
2 years ago

In 1939 he returned to the city and went to live with a brother in Pimville, Soweto, where he started his primary education at the age of 10 under the tutelage of Catholic missionaries.

On weekends Andrew would go to golf courses around Crown Mines and Turffontein to work as a caddy. The money he earned came in handy to augment his mother's meagre earnings as a domestic worker.

After obtaining a standard six certificate at Musi High in Pimville, he enrolled at St Peters in Rosettenville, in the south of Johannesburg. A famous institution for African boys, it was fondly referred to as The black Eton and over the years produced outstanding scholars who became prominent South Africans.

One of them, Oliver Tambo, would return as a science and maths teacher. He taught Mlangeni in a class that included pupils such as Joe Matthews (Naledi Pandor's father), Alfred Hutchinson (author) and Thamsanqa Wilkinson Kambule, another mathematician who became a prominent headmaster at Orlando High, "The Rock".

Mlangeni's involvement in student politics started in 1944 - the year the ANC Youth League was formed - when one Victor Moorosi formed the Pimville Students' and Ex-Students' League.

He was elected the organisation's first deputy secretary. The purpose of the organisation was to mould students into becoming useful members of the community by engaging in social activities that would enable them to learn positive values such as discipline.

The other aim was to introduce them to civic politics. Mlangeni expressed interest in forming a student branch of the ANC Youth League but he said Tambo advised against it as it was against the college's code of ethics.

So he joined the Young Communist League and operated on the same cell as Ruth First, a Wits student at the time and crusading journalist, writing about the exploitative and semi-slavery conditions of farm workers.

He eventually joined the youth league in 1951 and served in various capacities from 1954 onwards, including as chairperson, treasurer and secretary of the Dube branch, a Soweto township where he had acquired a house after his marriage in 1950.

By 1959 he was secretary of the Pretoria-Witwatersrand-Vaal (PWV) region, the biggest in the country with 29 branches.

While many people will remember Andrew Mlangeni as a selfless freedom fighter - those who've had a chance to spend time with him have described him ...
News
2 years ago

When the anti-apartheid movement was banned in 1960 and the leadership resolved to adopt the armed struggle, Mlangeni was one of the six leaders who were chosen for military training.

By 1963, the ANC high command had established sabotage units nationwide, operating from a farmhouse with outbuildings on Liliesleaf Farm in Rivonia, northern Johannesburg. The property belonged to Arthur Goldreich, a painter and costume designer for the King Kong jazz opera.

Here the leadership operated underground under assumed names to evade the security police. Meetings were held on Monday evenings.

The plan was that they would be visible in their communities during the day to allay suspicions while in actual fact they were underground operatives.

Mlangeni travelled widely in his Zephyr Zodiac, recruiting new members to the ANC and to explain the movement's activities. During these travels he disguised himself by wearing a large beard and introducing himself to authorities as Reverend Mokete Mokoena.

But the special branch of the police was closing in and on the night of July 11 1963, they raided Liliesleaf and the houses of leaders such as Mlangeni, arresting 19 men.

On June 12 1964 the accused were sentenced to life imprisonment after they were found guilty of treason.

Mlangeni later remarked that he was not surprised by the sentence: "I expected to be arrested one day. But I was already steeled physically and mentally. I was one of those referred to as amadelakufa - hardened and fearless freedom fighters. I was ready to die for my beliefs."

Released in 1989 with nine other fellow Rivonia Trialists, in 1994 he served as an MP for several years until his retirement in 2014. In 1992 he was conferred with Isithwalandwe/Seaparankoe, the highest honour bestowed by the ANC on distinguished members.

He will be remembered as an ethical leader who took an unambiguous stance against corruption during former president Jacob Zuma years. A humble man who never abandoned his township roots, he lived in the same house in Dube.

Residents will remember him as a philanthropist who organised Christmas lunches and donated blankets for the elderly and less privileged. The father of four who lost his wife, June, in 2001, will also be remembered as a keen golfer who enjoyed his smoke way into advanced age.

Veteran ANC MP Essop Pahad has lamented the death of Andrew Mlangeni, saying it is a big blow in the efforts to correct internal problems of the ...
Business
2 years ago

Parliament’s presiding officers have added their voices in mourning the death of Struggle stalwart Andrew Mlangeni.
News
2 years ago

Veteran ANC MP Essop Pahad has lamented the death of Andrew Mlangeni, saying it is a big blow in the efforts to correct internal problems of the ...
Business
2 years ago

Parliament’s presiding officers have added their voices in mourning the death of Struggle stalwart Andrew Mlangeni.
News
2 years ago
Next Article