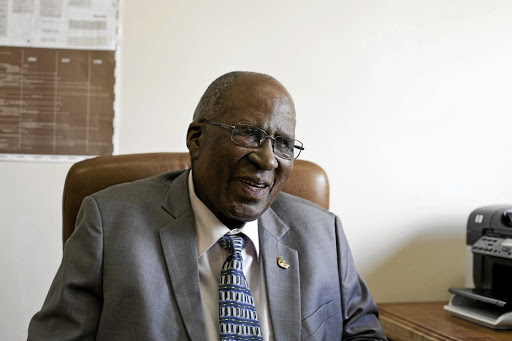 The late Struggle stalwart Andrew Mlangeni did not mince his words when he spoke out on various issues.

Whether it was his condemnation of corruption, views on land, education or marital relations, Mlangeni was always forthcoming, especially as he grew older.

Speaking at Rhodes University where was awarded an honorary doctorate in 2018, Mlangeni said: “Some of our political leaders have become absolutely corrupt – they are no longer interested in improving the lives of our people. They are busy lining their pockets with the money that is meant to help the poor people. What a disgrace!”

“They have forgotten that many people died for this democracy that we are enjoying today. The percentage of our unemployed youth is very high, poverty is rampant, and there is no sign of an immediate solution.”

Having been the chairperson of the ANC’s integrity commission, Mlangeni spoke to News24 in 2018 about his dismay at the corruption allegations that had been levelled against former president Jacob Zuma.

He said he believed Zuma should be sent to Robben Island if convicted of corruption.

He also told journalist Pippa Green that Zuma had “disappointed us terribly” when reports about him being influenced by Shabir Shaik and the Guptas surfaced.

“He was captured by the Guptas. He disappointed us terribly. We had trusted him when we put him up as president. We couldn’t have seen it because it was not clear,” he told Green.

Mlangeni, during his trip to London in 2018, also told The Guardian that he blamed the government system on how corruption continued to flourish in the country.

“No one wants to lose their jobs, they get money, they get good salaries, they get the facilities that go with being ministers, you get free housing, security transport. So once you are a minister and start to oppose the person that appointed you, then within 24 hours, you lose your job. People did not want to lose their job so they kept quiet,” Mlangeni told The Guardian.

At his 93rd birthday, Mlangeni shifted his focus and gave those who attended marital advice.

“We agreed on that‚ [but] three times a week… We strictly kept to that practice. Only occasionally would we go beyond three‚” he said.

“You understand what I mean‚ but that [sexual desire] of a girl goes up. It means we [men] get older quicker than some of the people. I know you don’t like what I am saying‚ but my age allows me [to say it].

“You know‚ at my age‚ I’m free to say anything as long as I don’t offend anybody or insult anybody.”

On his jail time on Robben Island

Mlangeni often spoke about how their jailers on Robben Island were surprised at how educated most of his comrades were. How when they had been told to expect to watch over dangerous criminals, they met intellectuals. He often spoke about how he, and others, used their time in prison to gain education.

“One of the biggest prisons we were afraid of being locked up in though, was the jail of ignorance. We had to demand to have access to education, a fight that was fought over a period of three years until it was granted in 1967. Guess who was the first among the inmates to register to study? Some fellow called Andrew Mlangeni,” he said at Rhodes University when he was awarded an honorary doctorate in 2018.

“I took a journey of 12 years to gain a BA degree, despite all odds. Our jailors were against us studying and they found excuses to disturb our progress. At times, it was due to the unavailability of funds, but we never let that deter us. I went to prison without a degree, but came out with two degrees.”

At the launch of his book, The Backroom Boy: Andrew Mlangeni’s Story, written by Mandla Mathebula, Mlangeni said: “We should value [freedom] and not squander it as we are doing now. We should diligently keep guard of it … I don’t know if we are keeping guard of this freedom that we have, or whether some people are squandering it.

“In more ways than one, our hopes in prison were kept alive by the undying hopes of the struggling people … that someday we would be free.

“We could easily have been erased from the memory of this nation. The nation did not forget. Being unforgettable, our hopes rose higher.”

Mlangeni told Mail & Guardian: “The government’s land distribution has actually failed in the last 23 years because the ‘owners’ of that land, the white people, when the government wants to buy property or farms from them, they increase the prices when they themselves got it for nothing.”

At Kgalema Motlanthe Foundation’s inclusive growth forum he said: “It’s a difficult question, but we must be very, very careful in how we solve this problem, because if government is not careful in resolving it more or less peacefully, farmers, especially the Afrikaners, are not going to give up this land issue very easily,” he said.