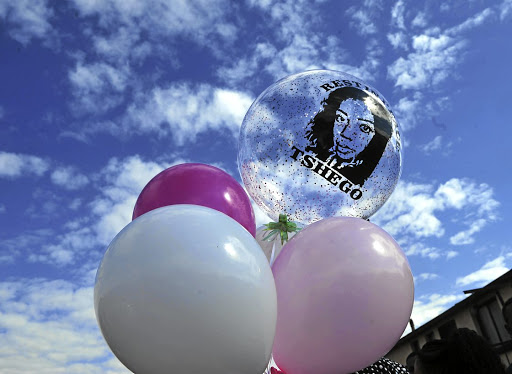 Balloons with an image of 28-year-old Tshegofatso Pule float in the air at her funeral. Pule, who was eight months pregnant, was found stabbed and hanging from a tree two weeks ago. /Veli Nhlapo

The past few weeks have seen a significant increase in the number of women being raped and killed in our country.

The spate of killings that has become all too familiar in our country, but which we hoped would not occur in the middle of a global health emergency, is continuing unabated.

The killing of Tshegofatso Pule, 28, who was found stabbed and hung on a tree, sparked outrage. She was eight months pregnant and her savage killing highlighted the reality that the lives of women in our country do not matter.

In response to the murder of Tshegofatso and other women, some men organised protests across the country as an expression of solidarity.

As a feminist and someone who has participated in dialogues and protests against gender-based violence (GBV), I'll be the first to commend this initiative.

The reality of the situation is that men must lead the fight against this scourge. It is they who are perpetrating the violence and therefore they who have the capacity to stop it.

Placing the burden of ending GBV on women is wrong and unfair, because women are true victims in this. There is nothing that we do to invite violence upon ourselves - except maybe to be women and to exist. So, I agree with the logic that men should lead the charge, hold themselves accountable, and fight to create a safe space for us.

President Cyril Ramaphosa says he is deeply disturbed by the latest surge in the number of young women murdered across the country.
News
1 year ago

But while I applaud the efforts of such men, I'm deeply disturbed by the language that they're using in their protests. It is a language of violence that is embedded in the very patriarchy that they're trying to fight.

Posters are being circulated and just this past Monday, we saw placards being held up at a demonstration in Gauteng, with the words "Stop killing our women!" This disturbing narrative is rooted in the belief even by decent men that women belong to them.

The word "our" denotes collective possession. It speaks to ownership. Referring to women as "our" communicates a thinking that women belong to men, and that we must not be killed because we are possessions of men. It strips us of our autonomy and renders us possessions. In this simple sentence, patriarchy was exposed.

Another deeply problematic narrative that is being cemented by men who want to be our allies is the idea that men who rape and kill are monsters. It is expressed in statements like "Real men don't rape" and similar sentiments.

This is a very problematic narrative that seeks to isolate rapists and killers from society by presenting them as an aberration when in reality they are an expression of patriarchy.

Patriarchy, like racism, is not about individuals. It is an ill-fated and diabolical system of organising society, and it is this that facilitates GBV.

An East London taxi driver has been arrested after his ex-girlfriend was stabbed to death.
News
1 year ago

The Solidarity Fund has approved R17m in funding for initiatives that support victims of gender-based violence as part of its efforts to assist those ...
News
1 year ago

Activists against gender- based violence have accused the government of paying lip service to the fight against the killing of women and children.
News
1 year ago
Next Article