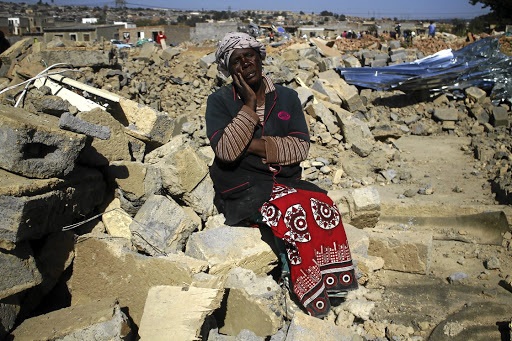 Liza Modiba sits among the rubble of her and other residents' homes next to the Malboro Gautrain station, that were demolished by the Red Ants in Alexandra. The writer says the lives of the poor do not matter in this so-called democratic SA.
Image: KABELO MOKOENA

Alexandra township, where poor black South Africans lived in cramped and squalid conditions during apartheid, today in democracy is marked by rat infestation among the new negatives.

Now with the introduction of smart city in Lanseria, as announced by President Cyril Ramaphosa, one is compelled to pose the question: how are the residents of Alexandra and other poor communities feeling?

Throughout last year, Alexandra had been in the news, with residents causing chaos over poor service delivery, lawlessness and increasing number of informal structures.

The Red Ants security company demolished the illegal structures around May. Then Johannesburg mayor Herman Mashaba apologised to Alexandra residents and vowed to rebuild the houses which were demolished in Stjwetla, ward 109. He promised that the City of Joburg would immediately rebuild their houses.

I believe that no one wants to take blame for what had happened to the residents of Alexandra. The ANC blamed the DA-led city administration for the demolitions, which is a valid charge because the DA was the governing party in the city at the time.

President Ramaphosa's State of the Nation Address did not include the Alexandra community. Yes, it is the duty of the local government to oversee service delivery matters in municipalities. However, I took the announcement of grand plans for Lanseria to be developed into smart city as an insult to the poor people of Alexandra.

The inquiry into alleged human rights violations in Johannesburg's Alexandra township is likely to hear on Wednesday exactly who authorised the ...
News
2 years ago

The Alexandra Renewal Project (ARP) was announced by then president Thabo Mbeki in his State of the Nation Address on February 9 2001.

The project was aimed at changing the physical, economic and social environment of Alexandra and was billed as a joint urban regeneration project involving the local, provincial and national government as well as the private sector, nongovernment and community-based organisations.

At the end, the ARP was a shambles with politicians enriching themselves from the funds allocated for the ambitious project, which was a joint venture by the Gauteng province and City of Johannesburg. Both spheres of government were at the time led by the ANC.

The Alexandra residents still do not know what happened to the money. The Daily Maverick interviewed a 60-year-old Letiya Zungu who said: "We don't know even a cent of that money. I have been here for 60 years, but I am still a tenant because of corruption. Money was stolen, simple."

The probe by South African Human Rights Commission (SAHRC) together with the office of public protector into the ARP yielded nothing as no official wants to accept responsibility for billions of rands stolen or squandered on the project.

Our country is not moving forward. The lives of the poor do not matter in this so-called democratic SA.

I am aware that the smart city will consist of schools, universities, hospitals, and factories, perhaps will reduce the unemployment rate. But why not fix what has been a black person's nightmare since years of apartheid.

I am not a resident of Alexandra but it pains me to see the living conditions in one of SA's oldest townships. Do we have to fight again to restore black people's dignity?

I maintain that the smart city idea for Lanseria is an insult to the people of Alexandra, and that SA is only interested in satisfying the lives of the rich.

*Lithebe is a journalism graduate.

Beneficiaries made to pay rent
News
3 years ago

Conveners of the Alex shutdown have told an inquiry conducted by the SA Human Rights Commission and the public protector that their protests had ...
News
3 years ago

EFF leader Julius Malema has been given two days to withdraw "defamatory" statements against ANC activist Mike Maile, that the firebrand made during ...
News
3 years ago
Next Article