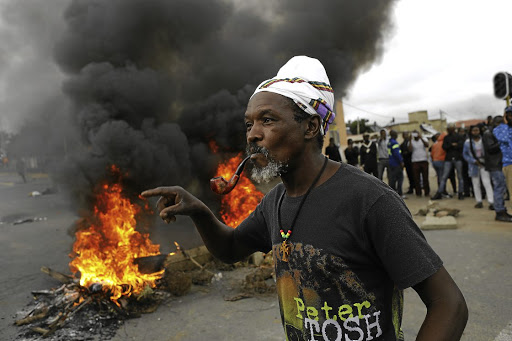 Alexandra residents have vowed to protest in Sandton on Monday.
Image: Alon Skuy

Residents of Alexandra have received some public support and sympathy as they make their way to Sandton, north of Johannesburg.

Since last week, organisers of the #AlexShutDown planned to march to Sandton after Mayor Herman Mashaba failed to meet with the residents. Mashaba said that he would meet with them when they made an appointment with him.

Service delivery protests broke out in the township last week, causing disruption as some roads were closed.

Some of the residents' grievances include illegal buildings and poor waste management in the township.

On Thursday, the mayor of Johannesburg responded to a call by President Cyril Ramaphosa to address the community of Alexandra.

The mayor's office said they were waiting on community members to schedule a meeting.

Gauteng premier David Makhura confirmed that Ramaphosa will visit Alexandra on Thursday to hear the grievances of the community.

The premier also said he would visit the township on Tuesday and meet with the #AlexShutDown committee.

The protesters have received support from some members of the public as they take the action outside of Alexandra.

If ever there was a community that deserved to protest it must be the people of Alexandra. Too long have you been lied to and ignored. #AlexandraShutdown #Sandton

Tomorrow our people take their struggle to the richest square mile in Afrika. Tomorrow WMC and their treacherous black stooges in parliament, cabinet&corporate sector will be affected. We hope they sustain it for as long as possible. #SandtonShutdown

Has anyone committed to meeting the residents tomorrow? Is #SandtonShutDown happening as threatened by the #AlexShoutDown Committee? https://t.co/AY9kaMNB5z

The day people of Alexandra decide to march in Sandton I will definitely join them. pic.twitter.com/czqD2LNAfy

Sandton residents stepping out of the house today when they hear the #AlexShutDown is coming pic.twitter.com/b5EdVKHTpP

So someone referred to Alex people as "Sandton Infestation". The road is too long for my race