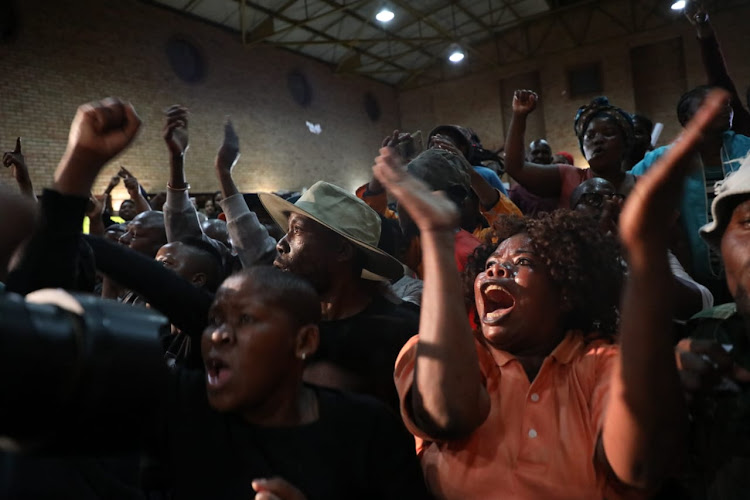 Alexandra residents on Monday filled up a community hall to prevent Mayor Herman Mashaba from addressing them.
Image: Thulani Mbele

Disgruntled residents of Alexandra, northern Johannesburg, who have been demanding an audience with Herman Mashaba for several days, yesterday refused the City of Johannesburg mayor to address them when he finally arrived at the troubled township.

When Mashaba arrived at the Marlboro Community Centre, the venue for the much-awaited meeting between Mashaba and members of the community, he was greeted by a stream of expletives from the residents who also sang Struggle songs. Mashaba had arrived with his MMCs.

Police secured all roads leading to the venue and inside the hall.

Johannesburg speaker Vasco da Gama informed the residents that the council would begin by receiving the memorandum of demands and then move to the the Integrated Development Plan (IDP) for the area.

But after these were read out the residents continued to sing and refused to allow the programme to start.

It became clear at that time that the meeting would collapse.

After  Da Gama failed to calm the situation, he and Mashaba, including his entourage left the venue.

They want him to listen to them
News
2 years ago

Thabang Lediga, one of the residents who protested next to the stage, said the mayor disrespected them by not coming when they had asked him to do so for several days.

“The mayor was given enough time to come and listen to the issues of the township but he did not come... Today  he comes and hijack an IDP (Integrated Development Plan) process to speak to us, we don’t want him here,” Lediga said.

Protests began on April 3 when residents shut down the township, demanding the city to act on illegal shacks, poor refuse collection and lack of development, among other things.

Last week, residents marched to the regional offices of the city at the nearby Sandton where they demanded that Mashaba receive their memorandum. The mayor did not pitch up and that further angered the residents.

After last night's collapsed meeting, Mashaba blamed the ANC for the protests.

He also lashed out at President Cyril Ramaphosa for using the protests in Alexandra for electioneering during his visit to the township last week.

“If the president knew how to act fast, he should have acted in Marikana [massacre in August 2012 where 34 minors were killed when police opened fire on them],” Mashaba said.