'Am I Next' vigils take over grieving varsities 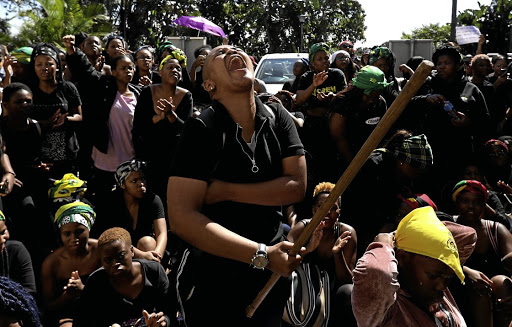 A University of KZN student is overcome with emotion during a protest over security on campus.
Image: SANDILE NDLOVU

Night vigils in memory of slain University of Cape Town student Uyinene Mrwetyana and other femicide victims are being held in universities across the country since Monday.

The University of the Western Cape was also planning a vigil for today, while UCT held an emotional night vigil on Monday after a 42-year old man had earlier confessed to killing and raping Mrwetyana, 19.

Mrwetyana's friends, fellow students and university staff braved Monday's chilly weather and congregated at the university in the evening to pay tributes to the slain film and media student.

The University of Pretoria also had a silent vigil yesterday, packing the amphitheatre at the main campus under the sombre theme "Am I Next".

One of their posters read: "No one should live in fear of being the next victim."

The vigil was also held to support "the reality of being a woman at the university spaces". It too was held under the "Am I Next?" theme, which had been trending on social media in SA since Monday.

The vigil at Wits University in Johannesburg last night was held under the hashtags #RIPUyinene, #EndGBV and #organizingforsurvival.

Rhodes University in the Eastern Cape, where Mrwetyana's mother Nomangwane Mrwetyana works as the student affairs director, is in the process of setting up a fund to assist the family.

"Our hearts and prayers go to Noma and her family, relatives and friends of Nene and all South Africans who have been touched by this tragedy," university's spokesperson Velisile Bukula said.

Bukula said part of their programme included lighting of the candles and placard-making and display which was led by their student representative council.

The University of Western Cape which was also grieving the loss of Jesse Hess, a first-year theology student who was murdered on Friday, called on all students and staff to break away from their usual commitments for an hour today as a gesture of solidarity against the surge of violence against women.

Those attending today's vigil have been asked to wear black this week to highlight activism to mourn the loss of "our sisters".

UWC spokesperson Gasant Abarder said they endorsed all campaigns on campus and across the country that condemn violence against women: "We continue working closer with the SAPS and community policing forums in our efforts aimed at ensuring the safety of students."