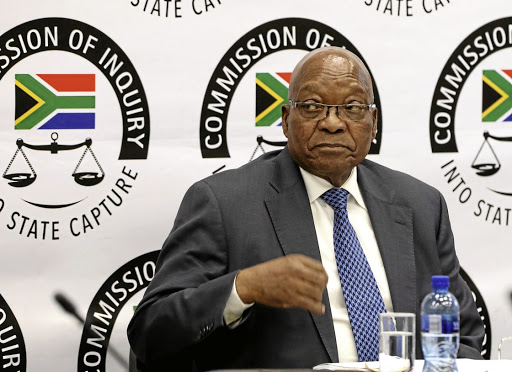 Former president Jacob Zuma says he does not know why people known and close to the party should not be prioritised for top state jobs. / SANDILE NDLOVU

The ANC's policy of cadre deployment came under the spotlight at the state capture commission last week.

Unpacking the ANC's cadre deployment policy and how it has fared in practice is key to identifying the effects of blurring of the lines between party and state.

Although the ANC has a deployment committee and the practice of deploying party loyalists throughout the state is ubiquitous and well known, the party does not seem to have a publicly available policy document on cadre deployment.

The commission has to rely on the testimony of senior leaders of the ANC to make sense of this policy.

According to Zuma, the role of the deployment committee is to recommend people for posts in state entities, including leadership and boards of state-owned enterprises as well as leadership of government departments.

He elaborated that the committee was necessary because the ANC knows the kind of people required to implement its policies.

Central to Hogan's testimony was her questioning of the effectiveness and wisdom of the practice of subjecting appointments to the public administration to the scrutiny of the party's cadre deployment committee.

The thrust of her concern is whether it is sensible for a handful of individuals who don't have institutional knowledge to appoint or recommend the appointment of senior government officials.

Should this not rightly be left to the relevant departments and state entities, especially because the deployment committee could be open to manipulation?

Hogan argues that proximity to the governing party and alliance partners should not be the determining factor in the appointment of individuals to senior positions within the state.

Zuma contended that he does not see why people who are known to the party and who do not oppose its policies should not be prioritised.

Former president Jacob Zuma has rubbished claims he insisted that Siyabonga Gama be appointed as Transnet's group CEO in 2009.
News
2 years ago

Zuma insisted these were Hogan's own views and that he wouldn't want to debate or respond to her opinion.

What is telling is that both failed to contextualise the policy within their own party's logic and approach.

The ANC's cadre deployment is interwoven into its theory of change: the national democratic revolution (NDR).

I have previously characterised this as the ANC's "national project" that "aims to transform SA into a nonracial, nonsexist, democratic and united country.

The ANC is not only at the helm but also at the centre of the achievement of this goal. To that effect, it is to rally the state and all of society behind this vision".

Former president Jacob Zuma has changed his mind, now agreeing that he will continue to give evidence to the state capture inquiry - but it will be ...
News
2 years ago

The ANC sees itself as more than just a political party but as leader of society.

In the early days, as it took over government, the ANC applied cadre deployment as an urgent measure to mitigate the risk of being sabotaged by public servants who served under the previous regime as well as to respond to the exodus of technocrats.

But having declared that it was ready to govern, it should have planned for this.

Given that cadre deployment is a central lever in its transformative project, the ANC should by now have more than just an ideological argument for the necessity but also a detailed document outlining the procedures and criteria for its implementation.

In the context of a governing party bedeviled by factionalism, patronage politics and a culture of promoting loyalty over merit, an unprincipled and vague cadre deployment can only lead to the weakening of state capacity and destruction of state institutions. Hence we now have a commission into state capture.