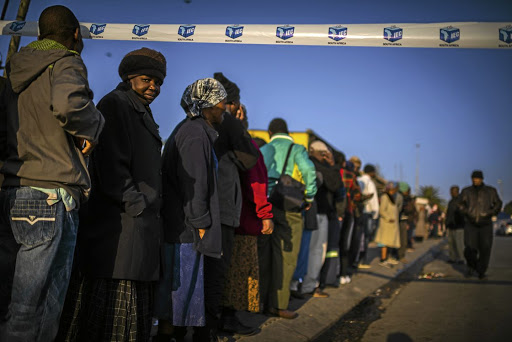 The writer says SA needs not empty slogans but products from buzzing production lines in factories in order to provide a sea of jobless people with hope and better life.
Image: Cornel van Heerden/Getty Images

The beginning of a new year is generally an optimistic time. But January 2019 is no such time for South Africans.

Politically, the year ahead looms like a nightmare. Being an election year, we are all supposed to be excited by the prospects of a new government of our choice. But we are not.

The whole of last year we were made to live under two slogans designed to lift our mood: "new dawn" and "thuma mina". By year end, these slogans could not dupe even the worst of fools.

We now enter a new year with a deep sense of apprehension, wondering what will happen to us. Even political analysts are confused; they don't know which party to vote for.

When you look at our major parties, nothing is promising.

If you remove Cyril Ramaphosa from the picture of the current ANC, what remains is a frightening collection of thugs and thieves - from the deputy president to the general secretary of the party. Who in their right mind would want such thugs to run a country?

To the left of the ANC stands the EFF. Up till last year, the party had disguised itself as an anti-corruption, pro-poor party. The VBS saga has left the outfit fully exposed as a venal gang of young thieves who have passed with flying colours from the university of corruption - the ANC.

On the right stands the DA. Until recently, the party's propaganda machinery had managed to hoodwink the public to view them as a truly South African party that can govern better. The DA spent the past three years exposing the rot of its racial kennel and its inability to govern itself.

We are expected to choose the less bad from the bad.

The most troubling thing about the upcoming elections is that, as you read this column, no political party has communicated a coherent message on how to build a better South Africa. All we hear is land expropriation without compensation, and a bit of investment talk here and there.

No one has told you how to improve the quality of education in township and rural schools, where SA Democratic Teachers Union and the ANC continue to destroy the future of the black child.

Political drama: from JZ's demise, to EFF BLF hypocrisy, to shapelessness of DA

No one has told you how SA must prepare itself for a new world of technology, where robots and computers will take jobs from humans.

No one has told you what will happen to the ballooning reservoir of unemployed black youth, who are turning in their millions to alcohol and drugs for solace.

No one is telling you what will happen to fix our dysfunctional municipalities, where even the salaries of public servants are no longer protected from the naked corruption of greedy mayors and municipal managers.

While we continue to twirl faster in our national confusion, far-sighted countries in the East are busy plotting to lead the future.

Donald Trump does not sleep when he thinks of China, a country that has now become the second largest economy in the world. The Chinese are educating their children as if only the sharpest minds shall enter heaven.

You must have met a Hyundai or Kia on your road in December. If you missed the cars, check if you don't have a Samsung smart phone in your pocket. That is how the South Koreans are stealing jobs from South Africans, by manufacturing high-quality products instead of producing empty slogans like "thuma mina".

The future belongs to products, not slogans. Who do you think will employ more people in 2019 - South Africa or South Korea?

For as long as our politics is in the hands of thoughtless idiots whose main business is to steal money, South Africa will always be a depressing place to live in.