No surprise as dysfunctional school scores 0% for matric results 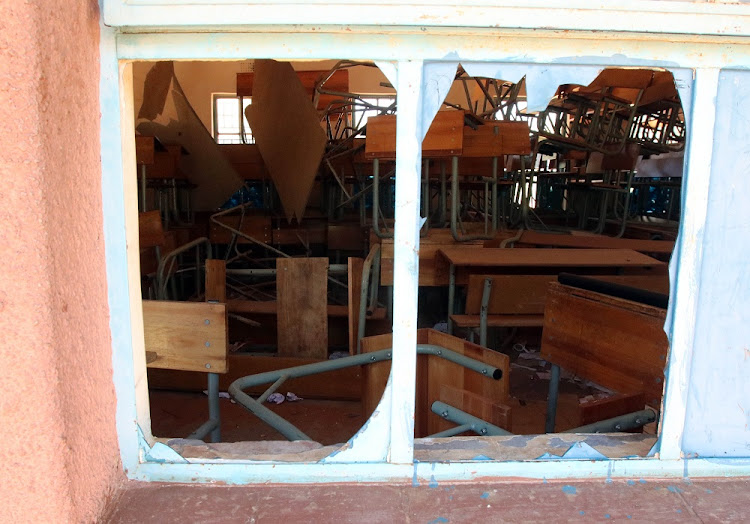 January 06 2019: Broken desks could be seen through broken windows inside classrooms at Senwane Secondary School in Kgalakwena village outside Mokopane, Limpopo, which resembles a dumping site. The school is one of three which produced a zero percentage in the matric examinations.
Image: ANTONIO MUCHAVE/SOWETAN

A former pupil at the perennial underperforming Senwane secondary school at GaMolekwa in Waterberg district in Limpopo is not surprised that all the pupils who wrote their matric examinations last year failed.

Lucky Ratime, who passed his matric in 2014, attributed the poor performance to a lack of teachers and resources.

The school, situated about 70km northwest of Mokopane, has been performing badly over the past few years.

With only 12 pupils writing matric last year, the school, was among three schools that produced a 0% matric pass rate in the province.

The other schools were Letshega-Malokwane secondary in the Sekhukhune district and Ramoroke in the Capricorn district.

Ratime, 23, said Senwane school was experiencing a serious shortage of teachers. In his matric year he was among 16 pupils who wrote the final exams at the school.

"The school has been operating with only five teachers since 2016 and no efforts had been made to bring new teachers to help pupils," he said.

Hlulani Malungani became the talk of the town after becoming one of the national top achievers in matric despite becoming blind in grade 10.
News
3 years ago

He said the problem at the school was that some of the teachers were forced to teach subjects they knew "little about or nothing at all".

"You can imagine a school with grades 8 to 12 having only five teachers. Pupils were bound to fail because the school has been a disaster for the past few years. I'm not surprised that no one passed matric last year," Ratime said.

He said the zero percent had dented the image of the school such that he was also thinking of tearing his matric certificate as he was embarrassed "because it [certificate] bears the name of the school".

During a visit to the school by Sowetan at the weekend, it emerged that six of the classrooms had no doors. The building is so dilapidated that it resembles ruins.

Most windows are broken while ceilings in classrooms have collapsed, just as the desks are also broken.

Spokesperson for provincial department of education Sam Makondo admitted to Sowetan yesterday that the school's fate had been sealed as the department would close the school and merge it with others in the area.

He said transport would be arranged for learners who would have to travel more than 5km to their new schools.