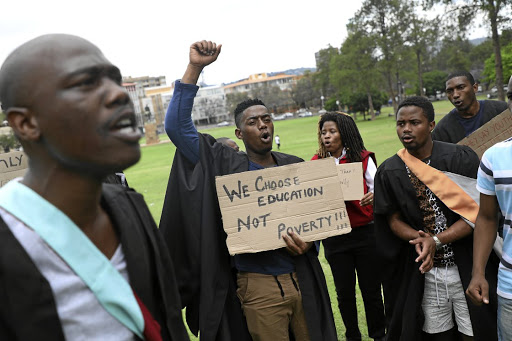 Unemployed graduates marched to the Union Buildingsto demand that the government employ them.
Image: Thulani Mbele

Closer to an election, political parties come up with wools to pull over peoples' eyes to gain votes. Strategists working for parties divide the population into categories, and tailor specific wools for specific groups.

The idea is to give each group the best wool to dupe the group. When Bathabile Dlamini was minister of social development, the ANC used her to distribute blankets and food parcels in the rural areas before elections. Party strategists reckoned that ruralitarians like blankets and head scarves.

A governing party has an electoral advantage. It can use state resources to dish out wools that are meant to benefit the party.

One such political wool is the recent announcement by President Cyril Ramaphosa that his government has decided to drop the two years experience requirement for entry-level graduates who seek employment in the government.

The ANC has figured it out that the youth, particularly university students, are disgruntled with the party due to many years of unfulfilled employment promises.

The ANC wants students and unemployed graduates to swallow the idea that they are not getting jobs because of the lack-of-experience requirement.

Thus, the party wants to create a picture in the minds of unemployed graduates, and university students, that with the relaxation of the experience requirement, graduates will now walk into government jobs.

A few gullible students will fall for this trick. Those who can think will not fail to see that this is an empty gimmick that won't create jobs.

Strip it to its practical meaning if you want to see its hollow core. Now that Ramaphosa has decided to drop the experience requirement, will all university graduates be shortlisted for jobs in the government? If they are indeed shortlisted, how many will get jobs?

Ramaphosa and his minister of public administration, Ayanda Dlodlo, will not answer these questions. For they know their government has no jobs waiting to be filled by inexperienced university graduates.

The governing party faces its biggest test yet in 2019 elections

We have also learnt that Eskom is 30% overstaffed, which means the power utility can only retrench, not hire. For how long, then, will an inexperienced graduate have to wait before Eskom has gotten rid of its excess human capacity?

The same retrenchment situation faces employees at SAA, Denel and other state-owned companies. The government has no money to pay salaries. Where then will money come from to employ university graduates without experience?

Even within Ramaphosa's government, the situation is dire. A leaked report suggests the government needs to retrench 30000 employees if it is to stay afloat. The denials that followed were undermined by admission in parliament by deputy president DD Mabuza that retrenchments are unavoidable.

If Ramaphosa's government is overstaffed, which other government of SA will hire inexperienced university graduates?

As soon as Ramaphosa's wool has revealed all its mendacious colours, the next stratagem by the ANC will be to instruct its cadres in parliament to draft a law compelling the private sector to hire graduates without experience.

When the private sector does not implement such a ridiculous law, ANC propagandists will resort to their tried-and-tested slogans about "white monopoly capital" and "radical economic transformation".

In 1928, Edward Bernays published an influential book on Propaganda in which he foresaw the advent of politicians like Ramaphosa.

University students are trained to think critically.Hopefully, they will see through wools meant to dupe them - wools that promise an easy path to employment.

Though Dlamini is incompetent, president retains her for politics
Opinion
3 years ago