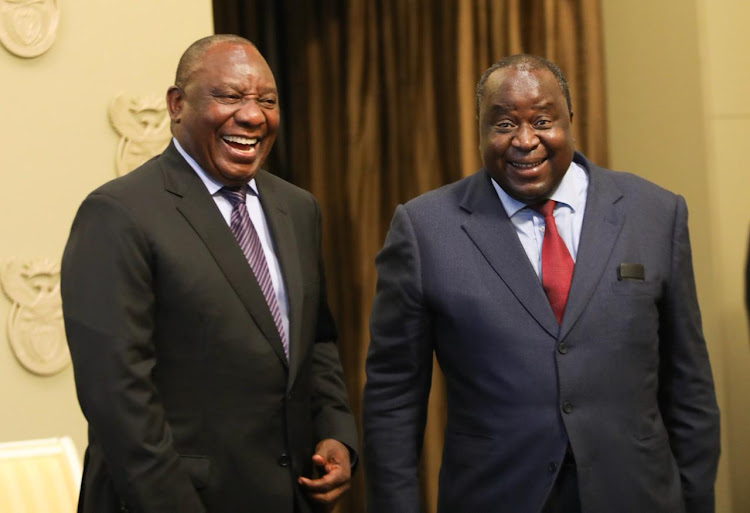 President Cyril Ramaphosa and Tito Mboweni at his swearing in ceremony as the finance minister on Tuesday, October 9 2018, in Cape Town.
Image: ESA ALEXANDER

Tito Mboweni has been appointed the country's new Finance Minister.

President Cyril Ramaphosa has announced that the former Reserve Bank Governor will replace Nhlanhla Nene who is currently engulfed in a lot of controversy regarding his hush-hush meetings with the Gupta brothers.

Sowetan reported on Monday that Nene had asked Ramaphosa to relieve him of his duties as minister.

This followed Nene’s testimony at the Zondo commission of inquiry into allegations of state capture where he admitted to meeting the Gupta brothers eight times at both their home in Saxonwold and their offices in Midrand.

There are a lot of capable people who would be able to replace finance minister Nhlanhla Nene.
News
3 years ago

Mboweni, who takes over the finance ministry with immediate effect, is not new to the financial sector as he was at the helm of the Reserve Bank for 10 years.

The 59-year-old businessman became the first black person to head the Reserve Bank in August 1999 when then president Thabo Mbeki appointed him to the post. He vacated the office in 2008 when his 10-year term came to an end.

A staunch ANC member, Mboweni spent 10 years in exile in Lesotho between 1980 and 1990 where upon his return was appointed the head of the party’s Department of Economic Policy.

Mboweni’s appointment comes as a shock as he had previously ruled himself out of Ramaphosa’s cabinet.

In February, he posted on his Twitter account: "Against the wisdom of my team‚ please don’t tell them this. It’s between us‚ I am not available for Minister of Finance. You cannot recycle the same people all over again. It is time for young people. We are available for advisory roles. Not cabinet. We have done that.”

Mboweni was entangled in a salary controversy in 2016 when he was accused, by Public Investment Corporation, of receiving “excessive” pay as the chairperson of the Accelerate Property Fund after his salary reportedly increased from R506 667 to a whooping R1.58-million.

When his tenure as a non-executive director of the Brics New Development Bank came to an end in 2017, it raised questions around whether there was any credence to the claims former president Jacob Zuma had used as a way to get rid of Nene whom he had promised a position at the Brics Bank.