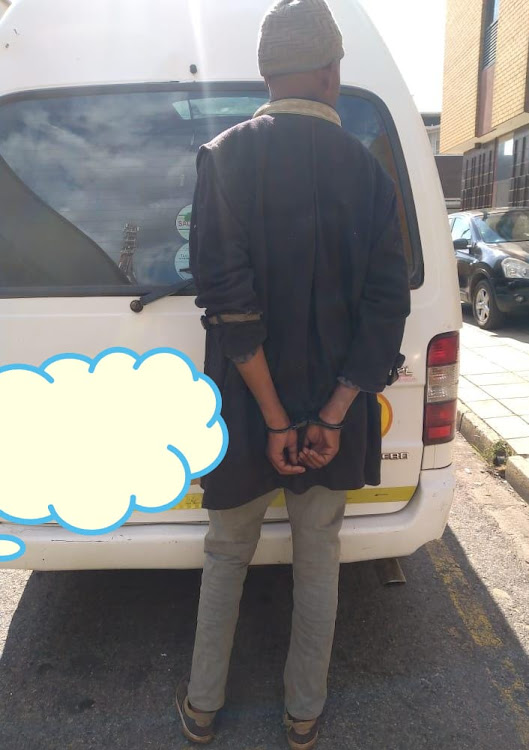 The taxi driver found himself in handcuffs after being pulled over by traffic police.
Image: Supplied

Gauteng traffic police arrested a 36-year-old minibus taxi driver who was allegedly three times over the alcohol limit while behind the wheel in Carletonville on the West Rand.

The driver was arrested on Monday afternoon during a drunk driving operation conducted in the Carletonville policing precinct.

The alcohol breathalyser reading was recorded at 1.24mg/1,000ml which is three times over the prescribed legal limit of 0.24mg/1,000ml.

The driver is expected to appear in the Carletonville magistrate’s court on Tuesday facing charges of reckless and negligent driving with an alternative charge of driving under the influence of alcohol.

“Driving under the influence of alcohol often results in impaired driving causing unnecessary accidents and loss of lives. The

Gauteng traffic police will continue to patrol on major routes to ensure that road users comply with the rules and regulations of the road,” said spokesperson Sello Maremane.

SA ranked the most dangerous country to drive in — report

The data revealed that SA's overall driving score is a low of 3.41/10.
News
3 months ago

More than 16 killed on Gauteng roads: Plea for safety on Easter Monday

More than 16 people died on roads in Gauteng over the Easter weekend so far.
News
3 months ago

A former Western Cape police reservist has been handed a five-year jail sentence for attempting to interfere with a drunk driving case.
News
4 months ago
Next Article