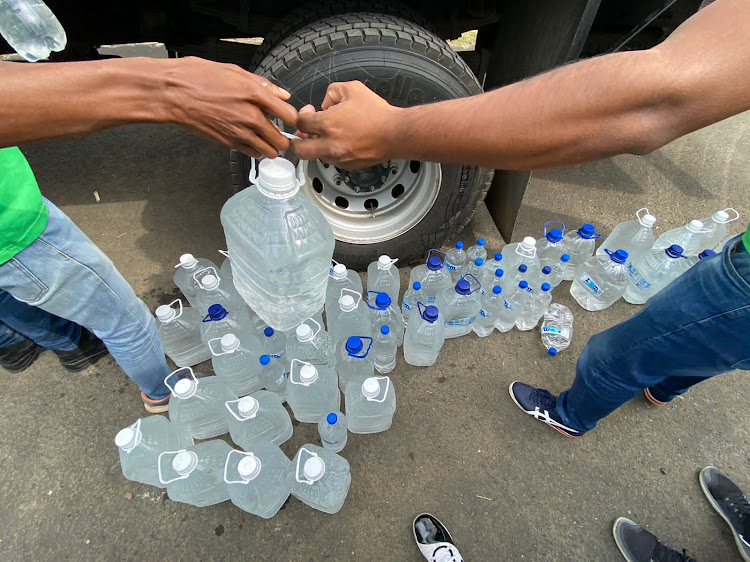 Five-litre water bottles were distributed to communities in KwaDukuza and Stanger on Saturday.
Image: ActionSA

Residents of Tongaat and Pietermaritzburg in KwaZulu-Natal received much-needed water tanks after going a month without water supply.

Due to water infrastructure damage caused by floods last month, residents are now reliant on water being delivered by municipal water tankers.

ActionSA councillors who had raised donations for the tankers and 1,000 5-litre bottles of water were in Tongaat, KwaDukuza and Inhlazuka on Saturday to help relieve the water shortages in the areas.

ActionSA councillor for eThekwini Busi Radebe said they were responding to a critical need as the residents of Tongaat have gone for 34 days without running water.

Seven 5,000l tankers were delivered in Tongaat and Inhlazuka, a rural community near Pietermaritzburg under the Umsunduzi municipality that has also been without water.

ActionSA councillor Faizel Cassim from Newcastle, who was born and bred in Tongaat, mobilised people to assist the community.

Water tanks donated by ActionSA councillors in Tongaat and Inhlazuka in KwaZulu-Natal in areas that don't have running water due to damaged infrastructure.
Image: Supplied

Radebe said 1,000 5l bottles were distributed in KwaDukuza and surrounding areas on Saturday afternoon and evening.