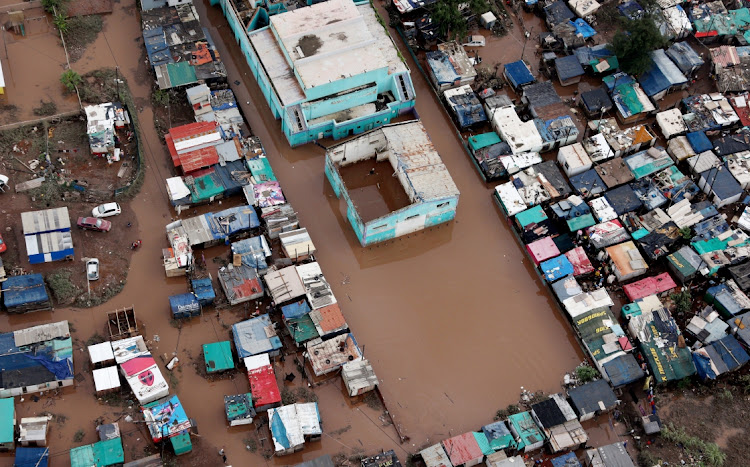 From the air, the scale of the flooding, destruction and misery becomes clear.
Image: Sandile Ndlovu

The government has revised the death toll in the KwaZulu-Natal floods from 448 to 435.

Police minister Bheki Cele said 13 people initially included in the total had died from unrelated causes. Autopsies showed that bodies had bullet wounds and nine people died of natural causes. Of the four bodies with bullet wounds, three were from Pinetown and one from Sydenham.

KwaZulu-Natal police commissioner Nhlanhla Mkhwanazi said police had found a lot of bodies during the floods and were under the impression that all the people had died as a result of flooding.

Cele urged people not to "plunder or steal" resources meant for flood victims.

“People that are plundering and stealing money will be arrested. The president has issued an instruction, but it would be good if people listened to their conscience.”

The situation was “dire”, he said. Among others, a family of 12 people has been reduced to two. “And you still have the audacity to go there and steal? You are not a human being, you are some kind of animal.

“We need to appeal to the conscience of these people, but if their conscience fails them, the state must be there to remind them that they need to be somewhere where they belong,” he said, responding to a question about looting of relief funds.

Cele was speaking during a media briefing by the justice, crime prevention and security cluster of ministers on government’s response to the floods.

Police would maintain law and order and prevent opportunistic crimes at identified areas in communities and business centres. These included Umlazi, KwaMashu, Pinetown and the Durban CBD and surroundings. Main national routes were also being monitored closely, he said.

Bodies were being recovered in the Umzinyathi, Hammersdale, Reservoir Hills, Hamburg and Henley Dam areas.

SANDF personnel were working to restore the vehicle and pedestrian bridge in Nteke.

Cele said soldiers would also provide clean drinking water to Pinetown West, uMzinyathi and Tongaat communities. A water purification system would be set up at the Inanda Dam and eight water tankers would be on standby to supply water north of Durban to Tongaat.

The SA Air Force was providing air support for search and rescue and transportation of relief equipment and goods. SA Navy divers were also involved in search, rescue and recovery efforts, he said.

The SANDF planned to deploy 10,000 troops where necessary.

Cele said the department of home affairs was also ready to assist with the replacement of documents at no cost.

Toyota SA on Wednesday announced it has suspended activities at its flood-damaged manufacturing plant in Prospecton, KwaZulu-Natal, while an ...
News
2 months ago

Flood damage can be moderated through property “insurance and EbA” on settlements as well as putting into place “reliable floodplain management ...
Opinion
2 months ago

The Solidarity Fund has promised to handle flood disaster funds for KwaZulu-Natal and the Eastern Cape with the same transparency it did when ...
News
2 months ago
Next Article