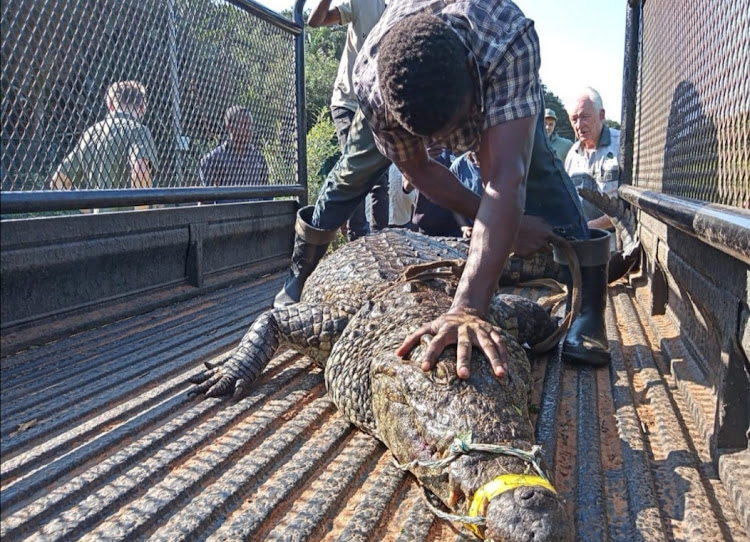 One of the two crocodiles at Zimbali, which was captured last week.
Image: Supplied

A trap has been set at the luxury Zimbali estate on the KwaZulu-Natal north coast to catch an elusive crocodile washed away from a farm during the recent floods.

The crocodile is one of two discovered at the estate.

SowetanLIVE sister publication TimesLIVE reported two weeks ago that crocodiles on a farm near Tongaat, north of Durban, were washed away during the floods.

Ezemvelo KZN Wildlife spokesperson Musa Mntambo said at the time that 12 crocodiles had been washed away from Crocodile Creek Farm between Tongaat and Ballito.

Several were recovered, but a few were still at large.

The Zimbali Estate Management Association said on Monday there is a crocodile in the dam inside the estate.

“We have attempted to capture it, but due to the tricky terrain we haven't succeeded.

“We have set a special crocodile cage trap in the hope of catching it.

“A second crocodile was caught on Friday. This one was out of the water and therefore easier to catch. It measured 3.3m and was returned to the crocodile farm

“We also assisted Crocodile Creek with setting up and monitoring a trap in the Tongaat River.”

Persistent lack of water is forcing a rural community in Limpopo to rely on a crocodile-infested river for drinking and bathing.
News
4 months ago

Persistent lack of water is forcing a rural community in Limpopo to rely on a crocodile-infested river for drinking and bathing.
News
4 months ago

Limpopo woman killed by crocodile while doing laundry at river

A family is mourning the death of their 25-year-old daughter who was killed by a crocodile while doing laundry at a river in Limpopo.
News
4 months ago
Next Article