'Where is the proof? 'asks alleged killer cop Nomia Rosemary Ndlovu as testimony wraps up

Trial postponed to October 14, when state and defence will present closing arguments 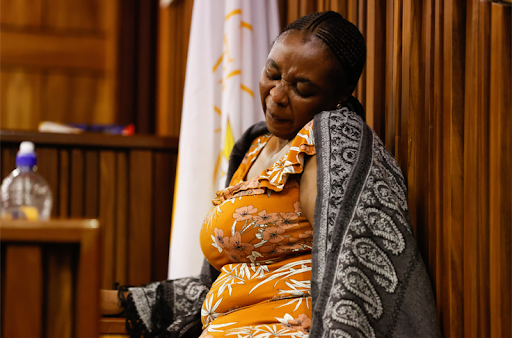 The state and defence have wrapped up evidence in the trial of Nomia Rosemary Ndlovu. They are expected to present closing arguments on October 14.
Image: Thulani Mbele.

After weeks of evidence in the dramatic trial of alleged killer cop Nomia Rosemary Ndlovu, the 46-year-old suggested she was tired of defending herself against the allegations she faces — and said the court could do what it wanted.

“The court can say whatever it wants to say, but I know nothing,” said Ndlovu when state prosecutor Riana Williams told her she was behind the killing of her lover, Maurice Mabasa.

“The last time I saw Maurice was on the morning of October 13 2015, when he left for work. I then received a call from Constable Mugwari [a police officer] asking me where I was and I said, 'I am on my way to Olifantsfontein police station.' That’s when I found out that Maurice was dead.

“But if the court feels that I am the one that killed Maurice, then I don’t know. Where is the proof? It surprises me, but if they say so, then so be it,” she said, signalling the end of a trial which has shocked the nation.

Mabasa, who had been her boyfriend for several years, was found stabbed almost 80 times. His body had been left outside a house in Olifantsfontein, near Clayville, where the couple lived together.

An emotional interview with alleged killer cop Nomia Rosemary Ndlovu's sister saw the mother of five break down in tears as she spoke about her ...
News
7 months ago

Mabasa is one of six people Ndlovu is alleged to have killed, with the other victims named as her sister, her niece and nephews, and her cousin — all in a bid to allegedly collect insurance payouts over a six-year period. She is also accused of plotting to kill several other relatives, with her last would-be victims being her sister Joyce and her five children.

It is the state’s case that Ndlovu hired a hitman to kill Joyce and the five children. The hitman turned to the police, who in turn set up a sting operation that led to Ndlovu being arrested on March 7 2018. She has been behind bars since.

Recognising Ndlovu’s irritation, judge Ramarumo Monama told Ndlovu that for now, she remained “innocent until proven guilty”, adding that it was the state’s responsibility to prove beyond reasonable doubt that she was guilty of the crimes she stood accused of.

This week, the state has also brought in a psychologist to analyse her behaviour on the stand. This is evidence that the state will use when it ...
News
8 months ago

After about 50 state witnesses were called, Ndlovu had herself and her mother to testify in her defence. After a gruelling cross-examination, Ndlovu told the court she had no-one else to call to testify.

Despite glaring discrepancies in some important parts of her testimony, Ndlovu’s lawyer closed their case, saying he had no re-examination for her.

The trial has been postponed to October 14, when the state and defence are expected to present closing arguments.