This week, the state has also brought in a psychologist to analyse her behaviour on the stand. This is evidence that the state will use when it produces its heads of argument. 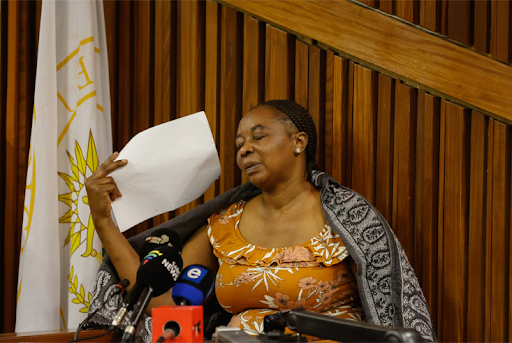 Former cop Nomia Rosemary Ndlovu fanned herself and complained of swollen ankles and dizziness while under cross-examination on Monday.
Image: Thulani Mbele.

Alleged killer cop Nomia Rosemary Ndlovu got hot under the collar when she was asked about how her sister, Audrey Somisa Ndlovu, had managed to pay substantial amounts for life and funeral cover while she only made R2,700 in her job as a security guard.

An irate Ndlovu fanned herself, responded loudly and spoke faster than she usually did as she replied. She was being questioned by prosecutor Riana Williams in the high court sitting in Johannesburg on Monday.

“Are you angry with me?” Williams asked Ndlovu, with the tension now palpable in the courtroom.

“I am not angry. I just took my pills, I did not get enough food. I am dizzy and finding it difficult to concentrate,” said Ndlovu after a 15-minute lunch break given by the court.

Ndlovu is accused of killing six people, including her sister Audrey, in June 2013, allegedly so she could pocket large insurance payouts.  Audrey was found dead in her rented room in Thembisa. She had apparently been given a poisonous substance and later strangled to death.

“How much did you make [in insurance payouts]?” Williams had asked Ndlovu.

“I am not sure because the policies did not all pay out at the same time.  Others were opened by Audrey. Some took several months to pay out,” said Ndlovu.

“I am not disputing that. I never calculated the amount because I never had the opportunity to sit in court and calculate this amount while in prison. All I am saying is that I simply did not have an opportunity to do the calculations,” she added.

It is the state’s case that on the day before Audrey died, Ndlovu had visited her Thembisa room. As the two sisters walked to the premises where Audrey lived, she stopped to make small talk with a neighbour and introduced Ndlovu to her neighbour — referred to in court as Mrs Ngoepe.

The state alleges that the sisters decided to share a meal together and Audrey then left her sister in her room to make them tea while she went to buy bread and atchar. It was then that Ndlovu was alleged to have slipped the poisonous substance into her sister’s tea. Audrey returned, they ate and Ndlovu left with a promise that she would return later.

The state alleges Ndlovu seemingly came back to find Audrey still alive and then strangled her to death, locked the security gate behind her and went home. The next day, she returned and alerted neighbours that she was unable to reach her sister by phone and was concerned, even crying and expressing fears that her sister may be dead.

The neighbours, including Audrey’s boyfriend who lived in the back of a house opposite hers, cut through her burglar bars and found Audrey dead in the house. Her body had started to decompose under the blanket.

It was while in Audrey’s room after the  body was found, with police on the scene, that Ndlovu allegedly knocked over two cups, picked them up and put them in a basin full of water outside the room, despite being warned by police not to do so.

The state believes these were the cups the sisters had used to drink tea the previous day.

The state said looking at Audrey’s finances, even with her side-hustle of selling Tupperware and perfume, it was almost impossible for her to have opened those life insurance policies herself as she could not afford them.

An audio recording made by the insurance companies for one of the policies was taken by the state to a voice analyst. He found that it was most likely Ndlovu’s voice that was heard on the line, fuelling the state’s claims that the policies may have been opened fraudulently by Ndlovu, with her sister knowing nothing about them.

All these points were put to Ndlovu and she refuted all the allegations against her.

On the voice analysis, she maintained her and her sister's voice sounded very similar and she denied impersonating her.

She said bumping over the cups was accidental and while she did put the cups in a basin, she did not know it had water in it.

“But why did you put them in the bucket?” Williams asked.

Maybe if I had said that we had drank tea in the room, the court could see it as tampering of evidence. But we drank the tea outside the room.

“I did mention that I bumped the cups, they fell and I took the cups as I was on my way out, but it was not done intentionally. It’s not something that I had set out to do. At the time, I was crying and hysterical,” Ndlovu answered.

“But the question is why did you pick them up?,” he asked Ndlovu.

“I bumped the cups and they fell. I picked them up. I was leaving the room because I had just realised what had just happened. I did not want to be in the room any more.”

Ndlovu said she did not know that at that point she was essentially tampering with evidence.

“Maybe if I had said that we had drank tea in the room, the court could see it as tampering of evidence. But we drank the tea outside because it was cold and we were basking in the sun,” said Ndlovu, now suggesting that the cups she had placed in the basin were not the same ones she and her sister had used just a day earlier to drink tea.

“I never heard [her friend and police officer, Phindile Shulube] warning me to not put the cups in the basin. I was just tidying up. The action came naturally,” she stressed.

“I put it to you, you washed those cups,” Williams said.

“I didn’t. Even the extract [from my bail application] says I put them in water. I did not wash them,” Ndlovu hit back.

“Tea — in fact it was coffee,” answered Ndlovu.

“What was in it?” Williams asked, questioning whether it was black, white, had sugar or any other substance in it.

Ndlovu suggested she was unsure of how her sister took her coffee that day.

On how Audrey, who was employed as a security guard, had been able to survive and also pay numerous life insurance policies, Ndlovu said besides her side-hustle, Audrey had in the past had a boyfriend who had a good job, at times even supporting her financially. Ndlovu said she too would assist Audrey with rent money or with Tupperware sales.

“If we accept your version that she took out policies in her own money ... Your sister had no spare money to pay for policies.  Audrey earned R2,700 a month,” Williams said.

It was then that Ndlovu put an end to Monday’s questioning.

“I am not feeling well. I am dizzy, the court is spinning, my legs are in pain [from the shackles]. I ate too quickly and now I am finding it difficult to focus or concentrate,” she told the court.

Proceedings had to be adjourned and Ndlovu made her way down to the court cells, leaning on the banister.

This week, the state has brought in a psychologist to analyse her behaviour on the stand. This is evidence that the state will use when it produces its heads of argument.

The matter returns to court on Tuesday.

Former police officer Nomia Rosemary Ndlovu complained of pain caused by the leg irons she was shackled in on Monday when she took to the stand in ...
News
1 month ago

‘If I wanted Zanele dead, I would have left her to die,’ says alleged killer cop Nomia Rosemary Ndlovu

Nomia Rosemary Ndlovu was testifying in the Johannesburg high court on Monday about events surrounding the death of her niece Zanele Motha.
News
1 month ago
Next Article