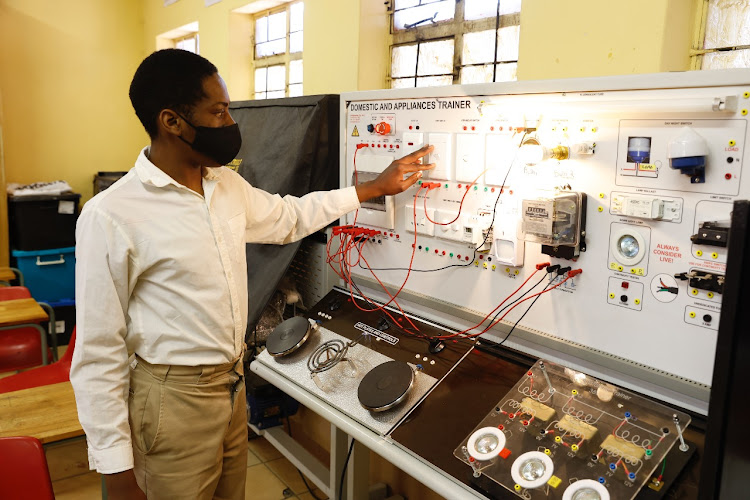 School’s principal, Thembi Letsoalo, said the school does not have grades but operates in yearly courses.

Hundreds of pupils with learning disability have found a facility to restore their dignity and learn entrepreneurial techniques at the Daveyton Skill School on the East Rand.

The school empowers young children to study, manage and start their own businesses.

School’s principal, Thembi Letsoalo, said the school does not have grades but operates in yearly courses.

“We take pupils from between the ages of 13 and 20, orientate them for a year and they learn multiple courses and choose from year two where they want to excel,” she said.

Letsoalo said the skills available at the school are motor mechanic, beauty, woodwork and art classes.

She said the school together with the Department of Health has partnerships with external companies that give these pupils trade practicals before they graduate and get certificates that will give them long-standing careers by the time they complete their four-year duration.

In a ground-breaking judgment on parenthood, the high court in Gauteng has ruled that the grandmother, not the father, should benefit from the estate ...
News
1 year ago

The six-year-old school  has in-house  nurses and a psychologist that assist the pupils with daily learning disabilities.

The pupils are collected by a bus from their homes about  surrounding townships such as Watville, Springs,  Etwatwa,  Cloverdene, and other  nearby informal settlements.

For many pupils  like 17-year-old Njabulo Mngomezulu, the school has become a haven of hope because he has found something that he is passionate about.

Speaking to the SowetanLIVE in the presence of his teachers and principal, Mngomezulu said he was enrolled at the school two years ago after failing his studies repeatedly in the main stream.

“I was losing faith in schooling but my family found the school for me and I am now an electrician and an entrepreneur while I'm in school."

Mngomezulu who learnt how to fix and handle electricity at the specialised school says can fix all domestic appliances and charges his customers after fixing their stoves, heaters, washing machines and lights, among other things.

Another female learner, Mary Nxumalo, 18, who is studying to be a beautician told SowetanLIVE that she now had a home ran salon that she operated after school hours and on weekends because of the skill school.

“I battled with science studies and math's  just after I began high school and after understanding that I was different and special from other children and could worker and letter better with my hands I found love in learning beauty.“Nxumalo makes about R 3000 every month by platting hair, doing nails and make up.

All these trades were obtained at the skill school for the past two years. Police in Ekurhuleni had  raised concerns at the  school regarding high  numbers of drug abuse  at the school last week.

This was after a surprise search  for 33 schools operation by the Daveyton SAPS, Ekurhuleni Metropolitan social workers ,the Department of Education and school government body members about the schools.

The family of a 30-year-old woman with a learning disability who was brutally assaulted, raped and left for dead in a ditch in Finetown, Gauteng, ...
News
5 months ago

However the headmaster of the school says these children deserve a second chance.

Letsoalo,  a teacher for nearly twenty years says she loves her children and has given up teaching in the main stream because of her passion and patience for children with special needs.

“Working with them every day has made me realise that they are victims of disoriented households ,poverty and domestic violence. So it's not all bad ,they suffer depression and substance abuse but many of them have shown remarkable success in their studies.”

Letsoalo said the pupils are  already entrepreneurs outside the school gates and do well contributing to the township economy.

The school takes children who battle in the main stream by repeatedly failing or battling with learning disabilities particularly for the main streams and learn better using their hands.

Another educator at the school told Sowetan that she has found her passion in teaching the pupils wood work for the past four years.

“They are not just a bad seed to throw away, the just need patience and understanding so they can reach their full potential. “The pupils have done great in selling their work and rendering services to the public.

They are also able to raise funds for the school through inviting the public on market day.

They sell their work and generate funds and showcase their talents.

“We are not just a school but a second hope for these children because if we so not teach them and only consider the main stream they will be victims of crime and poverty. We are changing the narrative.”

Storyteller and author Gcina Mhlophe celebrated 20 years of promoting literacy and the culture of reading in SA schools through the launch of two ...
Entertainment
4 months ago

South African umpire Patrick Selepe has become the first person with a disability to serve as an official at a Paralympic Wheelchair Tennis Event.
Sport
4 months ago
Next Article