'We have nothing to hide': Godrich Gardee on EFF campaign funding 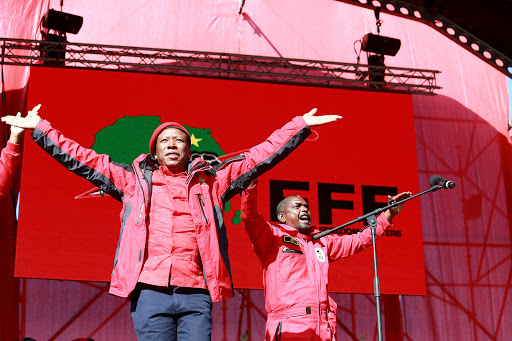 EFF secretary-general Godrich Gardee (right), pictured here with Julius Malema, on Sunday said the party can prove where it got funds for its local government elections campaign.
Image: THULI DLAMINI

EFF secretary-general Godrich Gardee says the party’s books are open for audit to establish where it received funds for its 2021 local government elections campaign.

“Our books are open and audited by parliament, the auditor-general, the SA Institute of Chartered Accountants and our bank accounts are held by white monopoly capital banking institutions,” said Gardee. He was speaking during an interview with Newzroom Afrika’s Athi Mtongana on the sidelines of the party's local government elections campaign in Cape Town’s Langa township on Sunday.

Gardee, was responding to a question about the DA’s petition to the Electoral Commission of SA (IEC) about the donations for the EFF's campaign.

The DA's petition, launched on September 17, calls for the IEC to investigate “the disjuncture between the EFF declaration and their significant campaign expenditure”.

“Every day the EFF election campaign shows signs of expensive spending on big campaign events, vehicles, advertising and branding. This includes voter registration events. These undermine their declaration to the IEC that they have not received any donations,” the party said in a statement.

To the DA, Gardee said: “We wish them good luck, they are chasing ghosts. Let the IEC do its work.”

He said banking institutions were monitoring the 30 to 40 EFF accounts. “There is nothing to hide. By now they should have actually told you who actually donated to the EFF’s account because the whites have access to our bank accounts.

“We have got nothing to hide. Our members actually were saying that we should go and get our R15m that we donated to the government for Covid-19 because the elections are going to be very expensive.

“We had to say to them, ‘look that was in good faith when we said we are contributing to alleviation to poverty of our people because of the pandemic', however they decided to eat our money and share it among themselves through the PPE scandal.

“It can’t happen because it was given in good faith and we have to live with constraints of not having money because of the Party Political Funding Bill Act, which we actually warned the ANC and the DA that they will be victims of their own making and they said the EFF has something to hide,” Gardee said.

He explained that the EFF received funding from the IEC, parliament, legislatures and public representatives every three months.

“That money has been enough for the EFF and we are not corrupt inside the EFF. We do not eat from inside the EFF. If a poster is R50 each, we pay that and we do not have a third person who will make it R2,000 per poster, like its happening in a political party which I cannot name.”

The data struggles are real, and the EFF says it doesn't want that to stop the youth from voting.
News
4 months ago

POLL | Have you read election manifestos yet?

The EFF, which has already promised voters jobs, free higher education and adequate service delivery, asked the public to contribute to their ...
News
4 months ago
Next Article