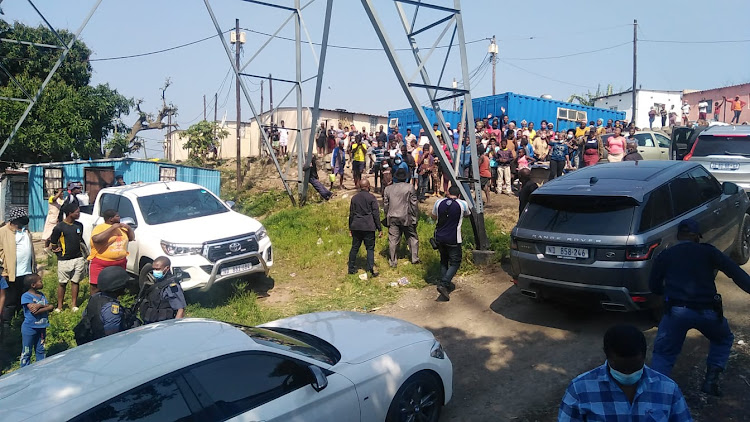 Police minister Bheki Cele said some of those who died in a hail of bullets in two mass shootings in Umlazi, Durban south, this week were hardened criminals.

Cele was speaking during his visit to the township after shootings at U and W sections which claimed the lives of 11 people.

On Sunday, a 14-year-old boy was among six people shot dead at U section in the Zamani informal settlement when a group of unknown gunmen entered  a block of flats and opened fire.

Accompanied by KwaZulu-Natal police commissioner, Lt-Gen Nhlanhla Mkhwanazi, Cele visited the Umlazi police station where he was briefed on both incidents, before making his way to the crime scenes.

Cele said that drug turf wars was the suspected motive for the shootings, and that some of the victims were “at the wrong place at the wrong time” during the incidents.

“The issue of drugs does come up because it could have been the issue of territory that they were contesting. Some of the profiles do not give a clear insight into their own lives, but there were innocent people killed, like the women and the 14-year-old boy who were killed. They seemed to be very much innocent - wrong place, wrong time.

“However, regarding the others, we have had some links with them with things that are not very good. Originally, they came from Folweni and are not from Umlazi,” he said.

It is understood that in the second shooting, a number of people had gathered at a house in W section to celebrate the release of one of their members, Mhlengi Shinga, from prison.

According to Cele, Shinga has had a brush with the law before, including a long list of withdrawn charges of house robbery against him.

“The person who was a new release from a correctional facility and was being celebrated has a very long record of bad things — ranging from possession of unlicensed firearms, robbery and illegal ammunition possession. One funny thing about it is that he has been sentenced three times and those years accumulated have added up to 12 years. However, they were all suspended,” said Cele.

He said a dedicated task team that was investigating murders in Phoenix during the unrest was assigned to the Umlazi mass shootings.

Five people were shot dead in Umlazi, south of Durban, on Tuesday night.
News
8 months ago

KwaZulu-Natal police are investigating six cases of murder after a mass shooting on Saturday night in an informal settlement in U-section in Umlazi, ...
News
8 months ago

An Umlazi man accused of orchestrating the brutal home invasion‚ which left four members of the same family dead‚ made a brief appearance in the ...
News
5 years ago
Next Article