Sad day for SA when families die at the hands of loved ones, says Bheki Cele 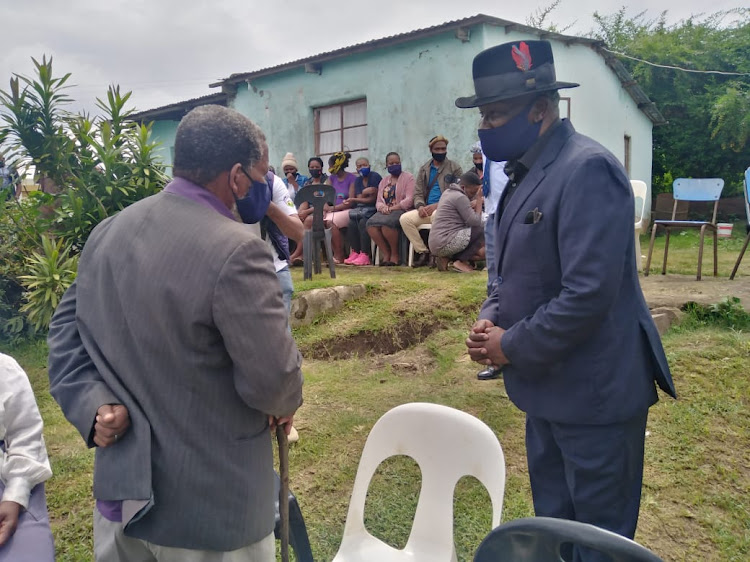 Bhekithemba Khumalo, whose brother Christopher was shot dead on Saturday along with five other family members, is seen with police minister Bheki Cele at the family home.
Image: Mluleki Mdletshe

It is a national tragedy that South Africans continue to die at the hands of their loved ones.

That was the observation police minister Bheki Cele made at the Khumalo homestead in Nkanini, northern KwaZulu-Natal, where a 36-year-old social worker allegedly fatally shot six family members after forcing his way into the home with an axe.

Cele, together with acting provincial commissioner Maj-Gen Thulani Gonya, visited the home on Wednesday and sympathised with the Khumalo family after the mass shooting on Saturday.

A nine-year-old child narrowly escaped after she hid underneath a continental pillow in the lounge.

“Yes, we saw the bedroom. It's a bad scene. It gives you chills — the gender and the aged involved. The family members lost their lives at a place they know and at the hands of somebody they know.”

Two days after the shooting, Eshowe police arrested the man at the home of a Greytown man. He was charged with six counts of murder and appeared in the Eshowe magistrate’s court on Wednesday. He is due back in court next month.

“We are really lost for words.”

Speaking about the man who was arrested, Bhekithemba said he was a “quiet and calm man who drank alcohol and spent a lot of time out with his friends”.

He said the man lived with him at his Dlangezwa home for a while but moved from Kranskop to Esikhawini for his job as a social worker.

“The reason he wanted a transfer was so that he could live closer to his two young children. So I gladly took him in because he is family. But as time passed he wanted to see them more, and he started spending more time in Nkanini. I still even have some of his clothes in my home,” Bhekithemba said.

Cele said the police ministry is concerned about the rising statistics of people who are murdered and raped in places where they should be safe.

“This is a home of six people who were supposed to feel safe inside their home. But they were killed there. We're trying to say that it should be a social issue that all respective institutions, departments and neighbours present here are supposed to work hard to prevent,” said Cele.

The minister's sentiments were echoed by the provincial social development MEC Nonhlanhla Khoza, who said: “The murder of pensioners and children has caused pain to many of us. It is even very hard to believe that a person trained as a social worker can have the audacity to murder defenceless old people and children.”

Khoza said society at large had a duty to protect children and the elderly and that the circumstances surrounding the deaths were “shocking”.

The man believe to have orchestrated the killing of Tshegofatso Pule has finally appeared in the Roodepoort Magistrate’s court.
News
10 months ago

A warrant of arrest has been issued for Robert Ngwenya, the estranged husband of Zinhle Mabena, for violating the protection order that the Isibaya ...
Entertainment
10 months ago
Next Article