Agrizzi painted as the racist in Bosasa saga 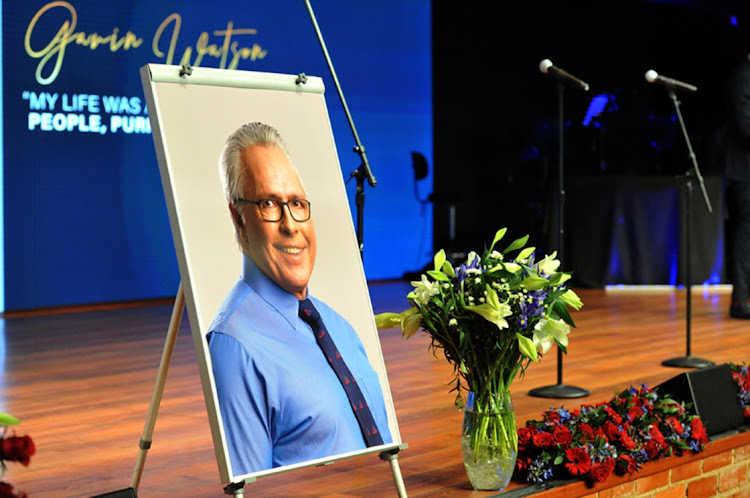 A picture of the late Gavin Watson during his memorial service in Gauteng in 2019
Image: THAPELO MOREBUDI/SUNDAY TIMES

Late Bosasa boss Gavin Watson was a national hero who should be honoured for his role in the upliftment and empowerment of the black community.

That is the view of Kevin Wakeford, a family friend and businessman alleged to have been a fixer for Watson who, among other things, helped his company to “resolve its Sars [SA Revenue Service] issues”.

Wakeford said the picture of Watson as a corrupt businessman who used his proximity to ANC leaders to the advantage of his business was wrong, as given life by former Bosasa COO Angelo Agrizzi.

Wakeford, who was testifying at the state capture inquiry yesterday, said Watson must be commended for proving that not all white people are racist and look down on black people.

Watson, along with his brother Cheeky, played rugby in black townships in the 1970s, against apartheid laws that legalised segregated sport.

The Watson family has deep roots in the Eastern Cape and Nelson Mandela Bay.

Wakeford said Watson did not end there, as he continued, through Bosasa, to uplift and empower black people, thus debunking the myth that all white people saw black people as “economic slaves”.

“Chair, I met a young man the other day who was a facilities manager at Bosasa headquarters and he recognised me at a hotel in Houghton.

“From a facilities manager, today he is a waiter,” Wakeford said.

“This gives you an idea of what Gavin Watson did to uplift people.

“So this picture painted of the Watsons generally, and of Gavin in particular, is not true.

“The Watsons gave white people credibility and legitimacy in this country.

“It is those people who played township rugby, built companies that were empowering and treated black people as equals, not as economic slaves and subordinates.

“It is people like that who we should treasure and give national awards to, not treat them like they have sold out on the value system of the Freedom Charter.”

If there was any racist to be condemned, Wakeford said, it was Agrizzi, whom he alleged had a particular disdain for black people who worked for Bosasa.

Wakeford claimed Agrizzi was opposed to BEE and viewed black people as inferior.

It was Agrizzi's “offensive and racist” interaction with black Bosasa workers, among other things, that led to his ejection from the company in 2017, compounded by his attempt to stage a hostile takeover, Wakeford said.

“Among the reasons Agrizzi's employment was terminated in March 2017 were first, his offensive and racist language towards the [Bosasa] black board of directors.

“Second, his autocratic behaviour and complete disregard for the authority of the board of directors.”

It was also opportunistic to paint Bosasa as a company that monopolised state contracts because of Watson's political connections, Wakeford said.

He said compared to the likes of  the Bidvest Group, which dominated the political economy of the country “from gardening to security contracts”, Bosasa was small fry.

“I find it absurd some people claiming in the press that billions of rand worth of contracts were given to Bosasa.

“The truth is if you were to take Bidvest as an example, they had massive state contracts and they still do to this day.

“I am sure Bosasa would be a little pimple in what Bidvest had in the broader political economy.”

President Cyril Ramaphosa has described as regrettable that the ANC had accepted donations from companies implicated in criminal activities, in ...
News
1 year ago

One of the accused, whistleblower Angelo Agrizzi, is still too ill to make it to court.
News
1 year ago

Hundreds of bidders - many from car dealerships and logistic companies - attended the auction of assets belonging to several African Global ...
News
2 years ago
Next Article