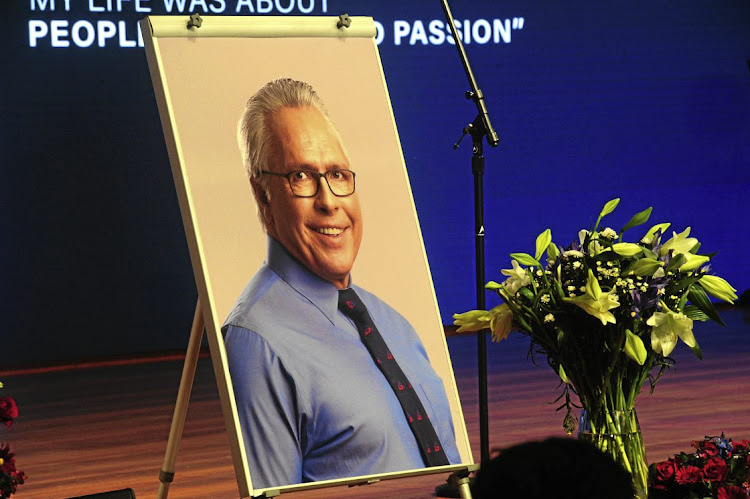 A portrait of Gavin Watson on the stage at Little Falls Christian Centre in Roodepoort where his memorial service was held on Friday.
Image: Thapelo Morebudi

The who’s who of ANC comrades from the Eastern Cape and the party’s national structures are expected pay their respects at a funeral for Gavin Watson in Port Elizabeth on Tuesday.

It was this proximity to the levers of power – amid allegations that Watson ran a vast bribery network which paid off key ANC officials, including former president Jacob Zuma – that saw Bosasa score billions in state contracts and tenders.

Nceba Faku, the former mayor of the Nelson Mandela Bay Municipality and chair of the ANC’s regional task team, told SowetanLIVE's sister publication TimesLIVE he would attend the service.

A man who loved God above all else. A man whose faith was unshakable, a man who could forgive and forget.
News
2 years ago

He said Watson had been a "lynchpin figure" in the struggle against the apartheid regime.

ANC councillor Andile Lungisa said he too would clear his schedule to pay tribute to Watson.

He described the businessman as a struggle stalwart, adding that he played a significant role in the liberation movement.

“He was painted as corrupt person by the media, but the truth will triumph one day. Those of us who knew him and his family understand exactly how they fought for the democracy we see today,” Lungisa said.

“I know him from the dark days because I was part of the liberation struggle. What he did was revolutionary.”

South African National Civic Organisation in the Eastern Cape, Tony Duba, said he would also attend, insisting that Watson and his family were pillars of the Port Elizabeth community.

“Gavin Watson and his family supported black people and the ANC before it was fashionable to do so,” she said.

Mokonyane was named by Bosasa whistle-blower Angelo Agrizzi as a conduit for money and gifts channelled to the ANC – including payments for Siyanqoba rallies and a birthday cake for Jacob Zuma – during his testimony before the commission of inquiry into state capture.

Mokonyane, according to Agrizzi, had allegedly received Christmas groceries as gifts from Bosasa "for years".

The "shopping list" was similar every year and would be along the lines of 120 cases of cold drink, 40 cases of beer, four cases of quality whisky, 12 cases of frozen chicken, 200kg of beef braai packs, eight lambs, cases of premium brandy and other speciality alcohol, Agrizzi said.

From the pulpit, she fired a salvo at Agrizzi, insisting that in time she would reveal “the truth”.