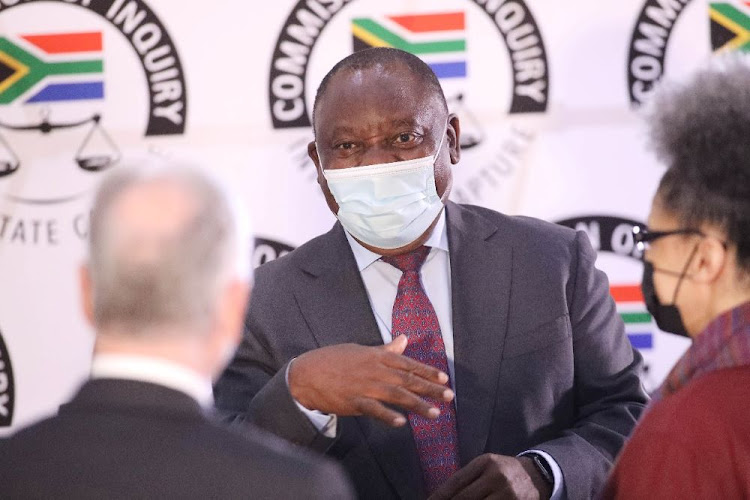 President Cyril Ramaphosa appears at the state capture commission to testify in his capacity as the president of the African National Congress.
Image: Veli Nhlapo

President Cyril Ramaphosa has described as regrettable that the ANC had accepted donations from companies implicated in criminal activities, in violation of the party’s own constitution.

The companies included controversial facilities management company Bosasa and the Guptas, which have been implicated in allegations of corruption and of dubiously securing tenders from government departments and state-owned entities over the years.

Ramaphosa had earlier told the inquiry that, while there had been no guiding principles and restrictions on political party funding before the recent passing of the Political Party Funding Act,  the ANC had relied on its constitution for the provision that frowned against “monies that are the product of a criminal act, offered in exchange for favours or are from a source known to engage in illegal or unethical activities”.

He maintained that he had been largely in the dark about the donations that were being secured by the party from questionable sources.

Evidence leader advocate Paul Pretorius pointed out that Bosasa had housed and financed the ANC’s 2014 election “war room”, adding that it was difficult to accept that “vigilant members of the ANC would not have been aware” that the company was showering the party with donations and benefits while it was equally a recipient of large dubious contracts from government.

“How could it happen that the party continues to receive benefits and be financed by Bosasa,” Pretorius asked.

Ramaphosa claimed he had been in the dark about Bosasa bankrolling its election centre. This was despite the fact that he had admittedly visited the venue with the party’s leadership during the campaign.

President Cyril Ramaphosa said the influence of the Guptas in the appointments of ministers and heads of state-owned entities under former president ...
News
7 months ago

“In hindsight, one can say we should have been more alert particularly to those reports that had emerged a lot earlier … so there had been a lapse,” he said.

Bosasa had since 2007 been the subject of various investigations over its alleged involvement in procurement corruption. The commission has heard how the company allegedly bribed top ANC leaders and state officials with cash and other gifts in exchange for contracts and political protection for more than a decade.

Pretorius pointed out that Ramaphosa’s hindsight explanation was not accounting for what had happened, adding that former president Jacob Zuma had known about allegations.

“Is it not correct that the reason why there was no quitting of this particular receipt of donations was that, in fact, the president (Zuma) was in control of the party,”  Pretorius asked.

Ramaphosa said: “Yes certainly, the president plays a very key role in the life of the party. He leads the party and provides leadership.”

Ramaphosa admitted that the Guptas had also pumped funds into the ANC despite the allegations against them.

The commission also heard how the ANC’s political funds were solicited from state-owned companies and from SA ambassadors who were allegedly compelled to pay “reciprocal levies” in exchange of their appointment, even if they did not belong to the party.