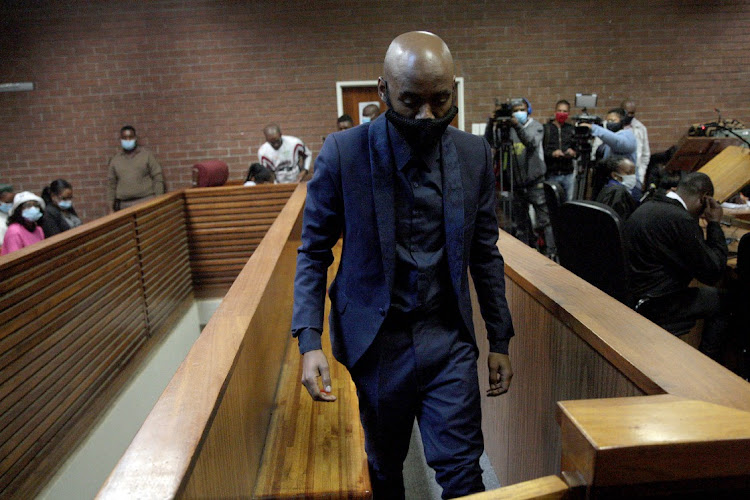 Ntuthuko Shoba, who is accused of ordering the murder of his pregnant girlfriend Tshegofatso Pule, is fighting for release on bail in the Roodepoort magistrate's court.
Image: Veli Nhlapo

Ntuthuko Shoba, the man accused of being the mastermind behind the murder of his eight-month pregnant lover Tshegofatso Pule, has made startling claims in his bid for bail by alleging that his convicted co-accused was in fact Pule's boyfriend.

Shoba, 32, told the Roodepoort magistrate’s court, on the West Rand, on Thursday that Muzikayise Malephane, who was sentenced to 20 years imprisonment for killing Pule, may have been her baby's father.

This information was part of "new facts" that Shoba used to reapply for bail after he was initially denied it on March 5.

Shoba, through his affidavit read into record by his lawyer Shaddy Sithole, said he had "new facts" based on an admission made to him by a fellow awaiting trial inmate at the Krugersdorp Correctional Centre.

He said  his cellmate, John Thweky Mohabe, told him that Malephane, who was allocated an adjacent cell to his (Mohabe's) after his arrest had confessed to being Pule's boyfriend.

Shoba said he only learnt about details of Pule’s murder through the investigating officer’s affidavit during his initial bail application.

“I then narrated the matter to Mohabe as read out in court. When I was explaining to him what transpired, I could see his interest and he looked surprised and confused. He later told me there was someone who was arrested for the same story by the name of Muzikayise Malephane, who one day revealed to him that the deceased by the name of Tshegofatso Pule was his girlfriend,” Shoba said.

Ntuthuko Shoba, who is accused of ordering the murder of his pregnant girlfriend Tshegofatso Pule, is expected to apply for bail on new facts in the ...
News
1 year ago

“He further told me that Malephane told him that he killed his girlfriend during an argument after he picked her up in Florida.”

Shoba further alleged that he was not aware of these facts during his initial bail application that the deceased had multiple relationships. “Mohabe further told me that this information of Malephane having a relationship with the deceased and having killed her after an argument was revealed to two other detainees,” Shoba said.

In a supporting affidavit by Mohabe, which was also read into record by Sithole, Mohabe said that he was approached by Shoba’s legal representatives on March 12 and asked him if he knew the 32-year-old.

He said he encountered Malephane, who was placed in a cell adjacent to his, and greeted him and initiated a friendship with him after asking him what charges was he facing.

“He told me he was arrested for murder but did not tell me the details at first. However, through our interactions he related the information about his arrest to me. He said he was detained for the murder of his girlfriend and that he picked up his girlfriend at a house in Florida. Along the way he confronted his girlfriend about where he picked her up and the argument ensued,” Mohabe said.

Mohabe said that Malephane told him that the argument escalated and they touched on Pule’s pregnancy, to which Malephane asked her if the unborn child was his.

“He further explained that he always doubted that the unborn baby was his. He further told me that he lost his temper and he killed his girlfriend and dumped her in a veld in Durban Deep mine next to Roodepoort,” Mohabe said.

He said Malephane disclosed the details of how he killed Pule. He said he and Malephane developed a brotherly relationship and would often exchange tales of their life experiences.

Mohabe said he was surprised when he encountered Shoba, his new cellmate, who relayed the same details for his arrest that were similar to those of Malephane's.

The court was not told what crimes Mohabe had committed that landed him in jail.

The matter was postponed until April 6 for the bail application on new facts to proceed.

Malephane was sentenced to 20 years' imprisonment for Pule’s murder, five for obstructing justice, possession of an unlicensed firearm and ammunition, to be served concurrently.

He alleged that he was offered R70,000 by Shoba to kill Pule.

Ntuthuko Shoba, who is accused of ordering the murder of his lover Tshegofatso Pule when she was eight months pregnant, will reapply for bail on ...
News
1 year ago

The man accused of being the mastermind behind the killing of Tshegofatso Pule has told the court that his life is under threat even as he is in ...
News
1 year ago
Next Article