Pule's family devastated as boyfriend appears for her murder 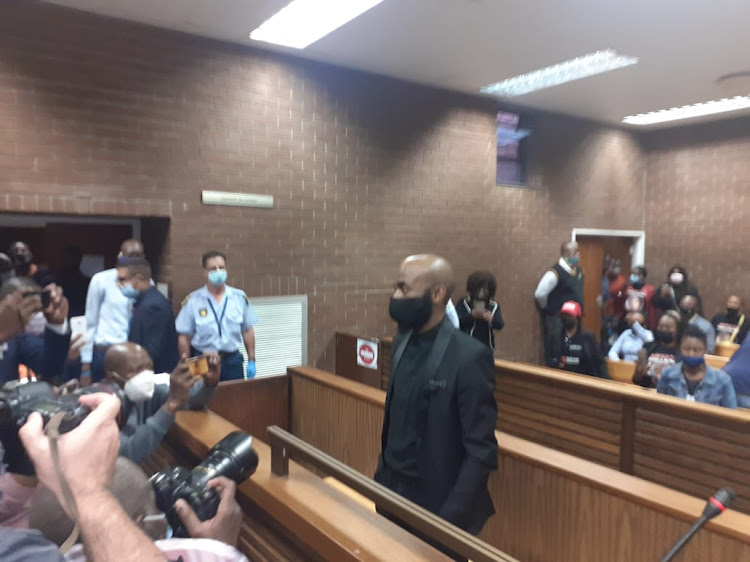 The case involving the alleged master mind behind Tshegofatso Pule's murder has been postponed to the 1st of March. Ntuthuko Shoba made a brief appearance before the Roodepoort Magistrates Court.
Image: VELI NHLAPO

The family of murdered Tshegofatso Pule says seeing her boyfriend appearing for her murder is difficult to handle and opens old wounds.

His arrest comes after the sentencing of Muzikayise Malephane on Friday, who implicated Shoba during his trial, saying he was the one who orchestrated her murder in June last year.

Pule’s uncle Tumisang Katako detailed how the family felt as Shoba, in his all-black suit, stood in the dock.

“It opened wounds that were beginning to heal. This one is worse because we’ve long had our suspicions and they were confirmed on Friday about his involvement in the murder. The family is still in tartars emotionally and psychologically because of what transpired on Friday. I’m not sure how they will handle this one going forward,” Katako said.

He added that the family still has questions as to what could have driven Shoba to allegedly commit such a gruesome killing.

Pule’s body was found stabbed and hanging from a tree in a veld in Roodepoort on June 5.  She was eight months pregnant. She had last been seen on June 4, after leaving her home in Soweto to visit her boyfriend.

Malephane was sentenced to 20 years' imprisonment for his role in Pule’s murder on Friday.

During his trial, Malephane entered into a plea bargain to turn state witness against Shoba. Malephane confessed that Shoba allegedly hired him to murder Pule to hide her pregnancy from his wife. He claimed that he was promised R70,000 for the killing.

Katako said the family knew that Shoba was dating Pule but did not have much detail on the kind of relationship they had. “She never reported any form of violence against him. She never reported any form of intimidation from the guy. I would not be able to tell you what kind of relationship they had. It was intimate between the two of them,” Katako said.

A calm-looking Shoba appeared in court and was not asked to plead. Some of the friends and family lost their cool as he stood on the dock and uttered insults at him. Katako calmed them down.

The National Prosecuting Authority (NPA) has already indicated that it will oppose Shoba’s bail  application due to the seriousness of the charges he is facing. NPA spokesperson Phindi Mjonondwane said Shoba will face charges of murder, conspiracy to commit murder and defeating the ends of justice.

The man believe to have orchestrated the killing of Tshegofatso Pule has finally appeared in the Roodepoort Magistrate’s court.
News
1 year ago

WATCH | ‘It hurts but it's what we wanted’: Closure for Tshegofatso Pule’s family as killer is sentenced

Muzikayise Malephane, the man accused of killing Tshegofatso Pule, appeared in the high court in Johannesburg on Friday.
News
1 year ago
Next Article