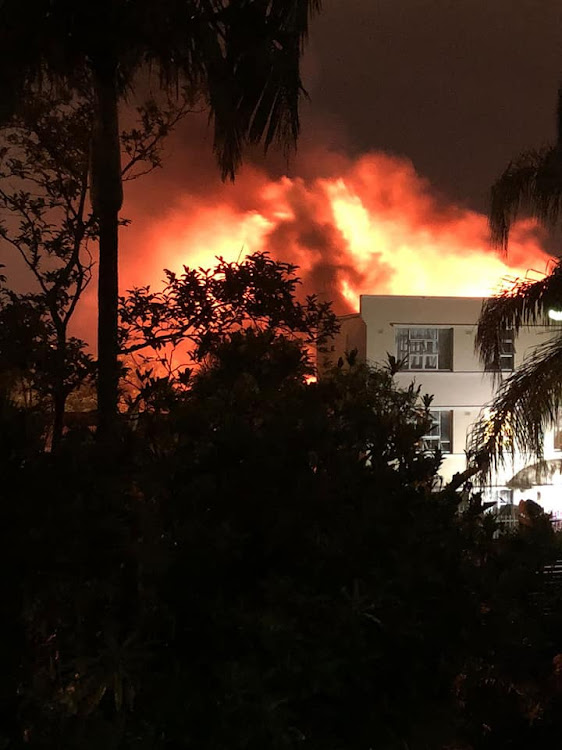 A fire gutted the top floor of Povall Court in Durban on Saturday night.
Image: eThekwini Secure via Facebook

The source of the fire that gutted a section of a block of flats in Musgrave, Durban, late Saturday night remains unknown, however there were no fatalities or injuries.

Durban fire department's Trevor Stevens, central division commander on duty at the site, told TimeLIVE that when he and his team of firefighters arrived, at least three flats were already alight, burning right through to the roof.

“We had to cut it off to the one floor and we saved most of one flat but the other four were burnt.

“No injuries at all, everybody was out when we got there.

“We have no evidence [of what caused the fire] at this point. The parts that are burnt are absolutely destroyed, we would have [to go] on what the people say because there was no evidence there,” said Stevens.

A Durban community tried to break windows and remove burglar guards of a home on fire in Ndwedwe, but they could not save a 45-year-old man and four ...
News
1 year ago

In a video circulating on social media, the firefighters managed to confine the fire at the back left side of the block of flats.

The video shows residents standing outside watching the fire department dousing the flames. The residents seemed calm, however some expressed worry about their chronic medication, presumably left inside the flat.

An ambulance can be seen in the video with paramedics assisting a woman who had passed out.