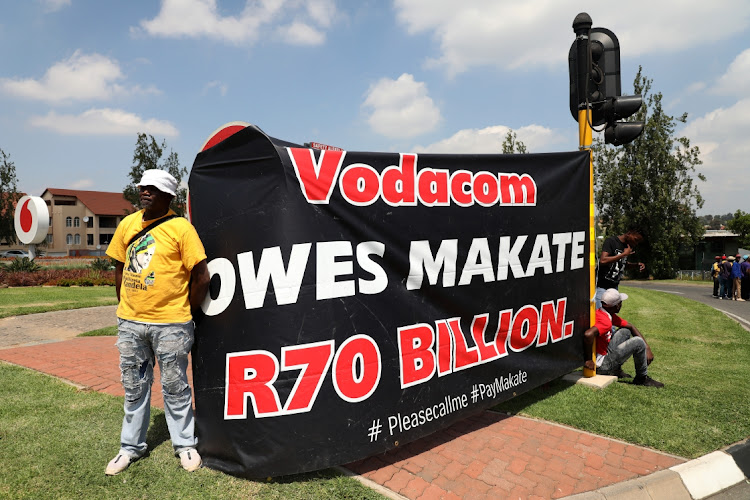 Supporters of the #PleaseCallMe movement protest outside Vodacom headquarters in support of Nkosana Makate on January 31 last year. The supporters were calling for Nkosana Makate to be paid R70bn for his ‘Please Call Me’ invention.
Image: THULANI MBELE

Vodacom had allegedly concluded that it owed “Please Call Me” inventor Nkosana Makate in excess of R63.4bn but went on to offer him R47m in compensation for his idea.

This is according to court papers filed in the North Gauteng High Court in Pretoria last week in which two former Vodacom employees have stated for the first time under oath that the cellphone company had calculated how much it made from the Please Call Me service as far back as December 2015.

Teboho Motaung, a former senior accountant at Vodacom who was responsible for calculating Vodacom’s business partners’ commissions, said the company’s stance that it was unaware how much revenue has been generated through Makate’s product is false.

In a response to Sowetan’s questions, Vodacom spokesperson Byron Kennedy said the company was yet to receive Makate’s supplementary affidavit, which dealt with Motaung’s statement.

“We will only be in a position to comment once we have received Mr Makate’s review application. Nonetheless, our position on the matter is consistent in that we have repeatedly stated our willingness to pay Mr Makate a substantial amount. Vodacom still holds the view that it entered into negotiations and negotiated with Mr Makate and his team in good faith in accordance with the order of the Constitutional Court,” he said.

Documents due to Nkosana Makate can't be found

Vodacom couldn't find seven of the 18 contracts that the high court ordered be make available to "Please Call Me" inventor Nkosana Makate in his ...
News
1 year ago

Makate is embroiled in a court battle with Vodacom after rejecting CEO Shameel Joosub’s R47m compensation in January last year for his idea. Makate had insisted that the mobile operator owed him at least R20bn before tax, however it has now emerged that R63.4bn had been processed as invoices bearing Makate’s name.

Makate approached the court last year to review Joosub’s decision to award him R47m and set it aside.

This is the first time that Makate has had the backing of someone who has been in the employ of Vodacom and was privy to what transpired in the background.

Motaung said when the matter was before the Constitutional Court, there was a “flurry of activity” at Vodacom as a number of finance personnel were tasked to examine and calculate revenue streams generated by the Please Call Me text service.

“The instruction was simply to investigate, identify and calculate the revenue derived from dedicated ledgers,” Motaung stated in his affidavit.

“The exercise endured for approximately two to three weeks, during which a number of personnel were placed under pressure by Mr Shameel Joosub, the CEO of Vodacom.”

Motaung said one of his colleagues told him that it seemed Makate had been paid by Vodacom after there were a number of invoices amounting to between R876m and R16bn bearing his name and that invoices of a law firm that represented Vodacom in the matter had been uploaded on the company’s financial IT system .

The five invoices which Motaung saw and attached in his affidavit were dated between December 11 2015 and February 11 2016 while the Constitutional Court ruled in Makate’s favour in April 2016.

Motaung and Makate both joined Vodacom at the same time as accounting interns in February 1995, according to the affidavit. Motaung said he made contact with Makate after seeing invoices bearing his name but was surprised that he had not been aware that the company was getting ready to settle.

“It is clear just from the magnitude of totals represented on the series of invoices that these are not invoices for legal services rendered. In fact the normal fees of the lawyers were raised through different invoices from the ones dedicated to the Makate/Vodacom matter,” Motaung stated.

Another former employee, Wanda Dlamini, who worked for Vodacom via a company that was managing its financial IT system until two years ago, confirmed that he was also asked to look into the records relating to revenue generated through Makate’s invention.

“It took me four to five hours to obtain it [revenue information] from the old system ... as the information is stored in archives. I believe that it should still be accessible and available. It was still available when I left in 2018,” Dlamini stated.

Makate told Sowetan yesterday: “The case is now in the capable hands of the courts and I am allowing them time to deal with the matter.”

Nkosana Makate, who has had a bruising battle with Vodacom over payment for the "Please Call Me" idea he developed about 20 years ago, on Monday ...
News
1 year ago

Leading cellphone network provider Vodacom has refused to grant Please Call (PCM) Me inventor Nkosana Makate access to its financial records as the ...
News
1 year ago
Next Article