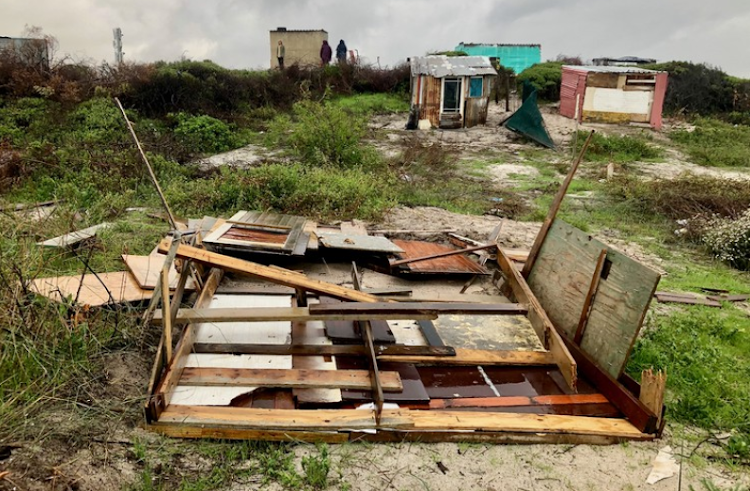 The City of Cape Town Anti-land Invasion Unit accompanied by law enforcement demolished five shacks at a site called Xakabantu in Vrygrond, in the rain on Thursday afternoon.

On Friday morning, most of the people whose shacks were demolished had left the area to find shelter.

GroundUp found a small group of people helping to rebuild Asavela Mqhokweni’s home. He had lived in the shack since April. He is 29 and unemployed. He said he just stood and watched as his shack was demolished, because he did not want to get arrested.

On Thursday night he sheltered beneath what was left of his flattened shack as the storm hit.

“We are very angry because there is no-one that should be out of their house in this rain,” said Nomapha Marcus, who runs the local soup kitchen in Xakabantu for Vrygrond United 4 Change.

On Wednesday, our nation watched in horror as a naked man was dragged out of his shack in Khayelitsha, Cape Town, and shoved around by law ...
Opinion
9 months ago

She said that a large contingent of law enforcement and the Anti-Land invasion Unit arrived around midday and started to demolish the homes. She said the officers became aggressive when people started to film them.

Wayne Dyason, spokesperson for the city’s law enforcement said that “rounds were discharged to disperse the crowd who had started acting in a violent manner”.

Xakabantu is on the outskirts of Vrygrond, close to the Coastal Park Landfill Site. It has seen conflict between the city and local residents for many years, according to Nonkosi Fodo, secretary of the Vrygrond Development Forum.

Fodo said there are about 150 structures in Xakabantu, most of them built by people leaving cramped rooms in Vrygrond. She said that the city demolishes shacks on a regular basis in the area, but the last demolition was in April.

“All we want from the city is for them to come to the table and engage with the community and come to an agreement,” said Fodo.

Malusi Booi, Mayco member for human settlements, said: “Xakabantu is on City of Cape Town-owned land and is not eligible for housing as it forms part of the False Bay Nature Reserve”.

He said that the city has “had ongoing consultations with the group about ongoing attempts to illegally invade this land” and the city had been granted a court order to prevent the occupation.

Booi said that the “city will continue to remove unoccupied and illegal structures to prevent the occupation of land”.

The City of Cape Town has ordered an independent and broadened investigation into dramatic events on Wednesday, when a naked Khayelitsha man was ...
News
9 months ago

The man who was dragged naked from his Cape Town shack on Wednesday has appealed to President Cyril Ramaphosa to help him reclaim his dignity.
News
9 months ago

The Khayelitsha man who was seen on video being dragged naked out of a shack during an eviction says only justice will restore his dignity.
News
9 months ago
Next Article