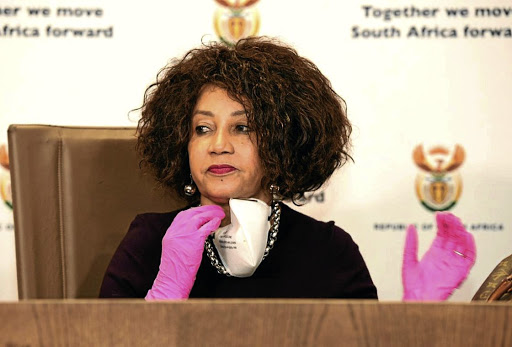 The ANC Women's League has challenged anyone with evidence of wrongdoing against human settlements, water and sanitation minister Lindiwe Sisulu to come forward.

ANCWL secretary-general Meokgo Matuba said there was a "media smear campaign" against Sisulu, which she described as disgusting.

"The tactics of tarnishing Sisulu's image by subjecting her to courts of public opinion is [a] cowardice approach.

"We challenge those who have evidence of Sisulu acting unlawfully or involved in any fraud and corruption to approach law enforcement agencies," she said.

Sisulu's name appeared in a number of publications last week, including Sowetan, due to allegations made against her adviser Mphumzi Mdekazi in affidavits submitted to the Hawks by Amatola Water CEO Vuyo Zitumane and her counterpart at Lepelle Northern Water, Phineas Legodi.

The allegations range from interference in the administration and tenders, to claims he was saddled with debt following Sisulu's failed ANC presidential campaign. Both Zitumane and Legodi have been suspended.

HeraldLIVE reported that Sisulu's failed presidential campaign had allegedly left Mdekazi R35m out of pocket and desperately looking to Amatola Water to recoup the money, according to Zitumane's affidavit.

"The insinuation that our client is desperately trying to defraud and/or corruptly... enrich himself and desperately looking to Amatola Water to recoup the money are beyond reproach and deliberately intended to injure our client's personality rights," she said.

"Our instructions are to refute the allegations that our client is R35m out of pocket, [and] that our client categorically denies that he confided to Zitumane that the campaign had left him in serious debt.

"Conveying and publishing as a fact, to the general public, untested allegations of corruption against our client is a reckless and unlawful disregard of our client's rights."

Meanwhile, Matuba said: "Since taking office, Sisulu has tried a variety of interventions to resolve management and governance issues which plagued the affairs of Amatola Water and Lepelle Northern Water... "[The state-owned entities] are instrumental in providing much-needed basic service, which is water."