'These people are robbers, finish en klaar': day of looting, violence, death across the Cape 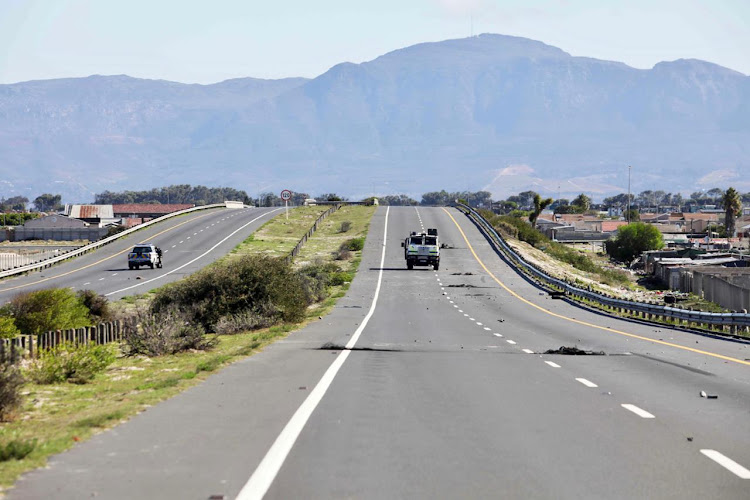 Police had their hands full on Wednesday trying to subdue violence and looting at several townships in Cape Town and along the West Coast.
Image: Sunday Times/Esa Alexander

A 25-year-old man was shot dead, allegedly by police, as widespread looting and sporadic violence flared in poor communities across the Western Cape on Wednesday.

Mvuyisi Diybilika said his son Sandile Sajini, 25, was killed on Wednesday during protests near the Samora Machel informal settlement next to the R300 in Philippi.

Cape Town metro police spokesperson Maxine Jordaan said that a long stretch of the R300 was closed due to violence between the Stellenbosch Arterial and Jakes Gerwel Drive. She said officers reported coming under fire from protesters using live ammunition.

Police spokesperson Brig Novela Potelwa confirmed that a man from Samora Machel was killed and that the incident was under investigation by the Independent Police Investigative Directorate (Ipid).

“The SAPS is aware of the death of a 25-year-old man from Samora Machel. The incident is the subject of an Ipid investigation, hence we would refrain from giving comment out of respect for the independent process undertaken by the directorate,” she said.

Diybilika said someone from the community called him to say his son had been shot. He arrived at the house and was devastated to find him dead. 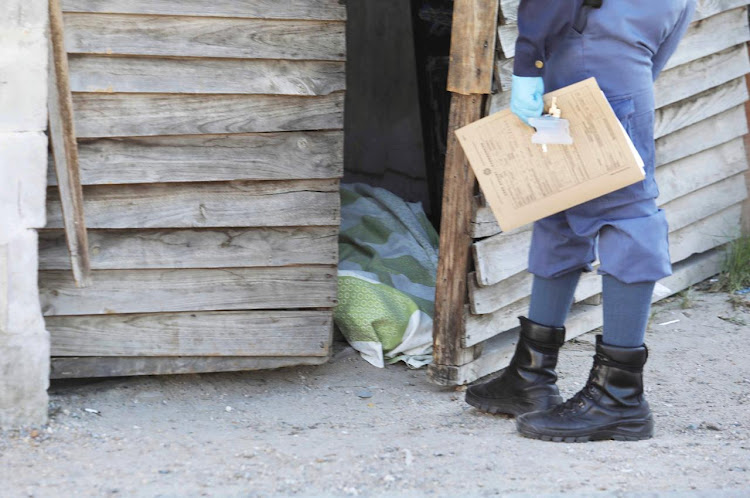 A police officer stands at the door where 25-year-old Sandile Sajini was killed, allegedly by police, during violent looting on Wednesday.
Image: Sunday Times/Esa Alexander

“I didn’t know that my son was killed because the person who told me [that he was shot] didn’t tell me that he passed away. When I came here I realised that he is no more — that he is dead. It makes me feel bad ... I don’t know what to say,” he said, choking back tears.

He had been told his son ran to a nearby house after being shot. “The people say that the police shot him. So, why? He didn’t do nothing wrong to nobody, he was just here on the street, then two police vans came,” he said.

“He tried to run until he reached the house where I found him. The owner of the house said he died after 10 minutes, but the people thought he was still alive because his body was still warm.

While Diybilika respected the investigating process, he hoped it will be swift so he can bury his son. “They cannot keep bodies for too long — he must be buried in time,” he said.

Experts believe the recent looting at shops and vandalism of schools are a mix of sheer criminal activity and people acting out of pure desperation.
News
1 year ago

Potelwa said the police responded to the Samora Machel area at 10.30am to prevent people from looting a delivery truck after barricades were placed on the R300.

“Suspects were dispersed by police and they ran into near Heinz Park. A move by the group to head towards the nearby Watergate Mall was also prevented,” she said. 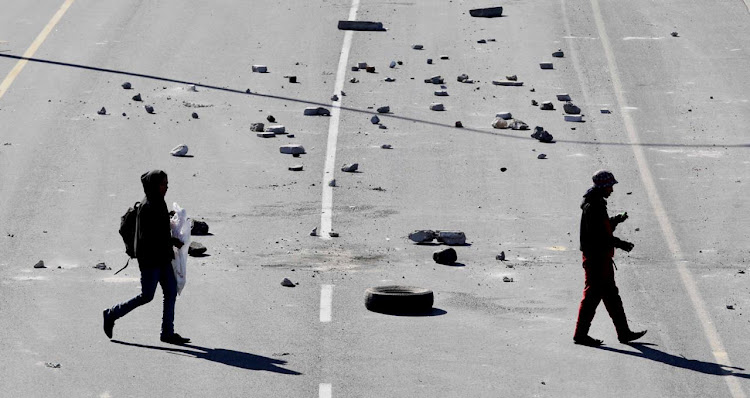 Residents near Samora Machel walk across the R300 which was barricaded on Wednesday by groups of people attempting to loot food delivery trucks.
Image: Sunday Times/Esa Alexander

In Delft, about 50 people stormed a supermarket and made off with grocery items valued at around R4,000.

Potelwa said Delft police on patrol in Delft South responded to the incident at about 11.30am.

“Police dispersed a large crowd that had gathered nearby. Meanwhile tracing operations are still under way to track the perpetrators,” she said.

“Today’s incident in Delft was preceded by three other incidents [on Tuesday] in Keerboom Street and on Delft Main Road, where shops were looted. Five suspects between the ages of 26 and 31 were arrested for theft.”

Videos on social media showed people blocking the road in Delft on Tuesday and pelting food delivery trucks with rocks before overturning and looting them.

She was dismayed by the actions of the looters, saying there was enough food in the area due to soup kitchens and food distribution programmes, one of which she runs herself.

“These people are robbers, finish en klaar. They just want to gain something, and they will go sell that stuff for drugs. I believe that,” she told TimesLIVE from inside her emptied shop.

“They’re not hungry, because how many soup kitchens are there here in this area? How many people that dish out food here? Me, I take money from each shop, R30, and I try to run a soup kitchen — just to provide for the children and the elderly. 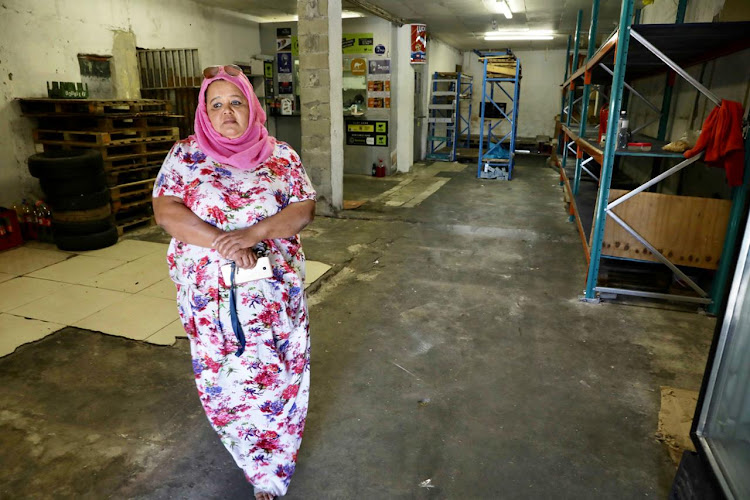 She said she was lucky enough to take evasive action.

“I was roaming around in my car and looking around all the back streets and on the cameras. They went from shop to shop. I came home and said to my husband, 'Please get the trucks out, let us remove our stock — because if we don’t, we will lose everything.'”

Owner of a cash and carry, Aisha Domingo who also runs a soup kitchen for the community in Delft on the Cape Flats says she removed her stock when people starting looting shops in the area @TimesLIVE pic.twitter.com/FiFaFqRpPF

Police said they had their hands full with sporadic incidents of public violence, theft and looting on Wednesday.

Several arrests were affected across the Cape Town metropole and in another incident on the West Coast.

“In Elsies River, a supermarket on Halt Road was ambushed by a group of about 15 suspects who helped themselves to items valued at R3,000,” said Potelwa.

“An attempt to break into a closed butchery in the area was thwarted as police dispersed the crowd,” she added.

There were also clashes between police and about 400 residents from the Vredenburg township of Witteklip, after police dispersed a group that tried to storm a local spaza shop after complaining about not getting government food parcels.

Potelwa said the group attacked police with stones. “The group also attempted to attack the house of a local councillor, but police reacted timeously and prevented the incidents from occurring,” she said.

“Four suspects were arrested and charged for public violence. Police are keeping an eye on the situation.

“Western Cape police wish to warn communities to respect the rule of law and refrain from engaging in unlawful conduct. Failure to act within the parameters of the law will leave the police with no option but to act decisively,” said Potelwa.

Though there is widespread frustration, spurred on by hunger and joblessness, some people voiced their disdain for the looting, blaming gangsters.

“One person spreads news [that] there will be food parcels at that auntie's home on the corner, then all the people flock there,” she told TimesLIVE.

“The media and government must let the people understand: stay in your house! Government is working out a programme where each house is going to get a parcel. You get people out to deliver food and then you give food to each house and then you know that house is going to get, and that house will get this much, and then next month again. Otherwise you’ll get a crisis like this,” she said.

Solomons said people had waited in queues after WhatsApp messages spread about food parcels but there was chaos when these did not materialise.

“Stop telling people there are food parcels here and there. Stop making up unnecessary rumours. Stop confusing the situation. Everything can be very easy if we all work together. We are supposed to be in our houses. You are making us all [stand] outside,” she said.

She also lashed out against crime in the area. “Gangsters need to know: your mother is also needing her food. It’s six months [of lockdown], it might be more. Your wife needs her food, your children need food, you need food! Stop breaking in, stop hijacking the trucks because we all depend on that.”

The number of Covid-19 cases in the Western Cape soared over 1,000 on Wednesday, and deaths in the province increased by five to 22.
News
1 year ago
Next Article