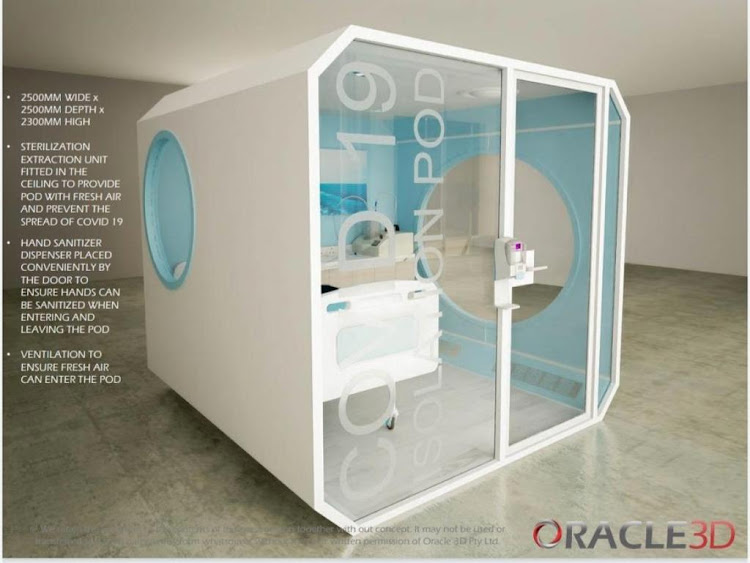 Oracle 3D has developed Covid-19 'isolation podz' that can be used in hospitals and other health care facilities.
Image: Oracle 3D

A company that manufactures 3D 'podz' has developed a Covid-19 isolation facility that it says can be used in hospitals and other health care facilities.

Warren Bosman, the CEO at Oracle 3D, said the company had previously developed smoking and baby-changing podz which were well received at shopping malls and other public spaces.

When Covid-19 spread across the world, “one of my friends who works on vaccines, asked me to look at making isolation podz,” Bosman said.

He said they took the existing podz and re-engineered them to make isolation podz.

“The main thinking behind the isolation podz is that they are a quick set-up and can be used in any open space that is covered.

“In most hospitals, the passages are wide and you can easily fit the podz. It's a quick and easy fix. It's a four hour set-up,” Bosman said.

He said the isolation podz were developed last week and launched on social media to get people's reaction.

“They have been well received. We've had feedback from people who deal with government. We are hoping to deal directly with government,” Bosman said.

“The isolation podz are high tech. They have safety glass fronts. They are insulating and an air flow system that runs through podz,” Bosman explained.

The podz also have electronic points to plug in ventilators and other equipment. They do not include beds.

Lockdown will end but golden rules will live on, say epidemiologists

Even if the lockdown ends on April 30, no-one knows when normal life will resume.
News
2 years ago

Health minister Zweli Mkhize says his department has seen an increase in the number of screenings and tests done in public health care facilities.
News
2 years ago
Next Article