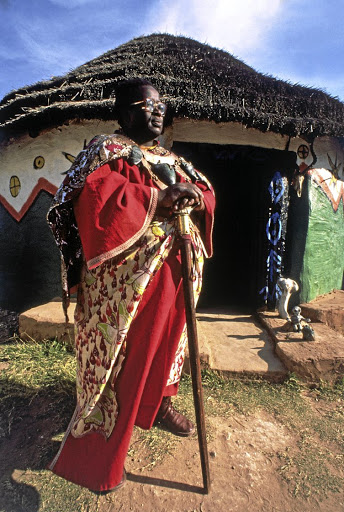 The late icon of African spirituality and heritage, Credo Mutwa, had incredible knowledge about Africa and earned respect among international scholars and writers.

This is according to historian and sculptor Pitika Ntuli, who paid tribute to Mutwa yesterday.

Mutwa died yesterday morning in Kuruman, Northern Cape, at the age of 98.

Ntuli said Mutwa, a playwright, poet and storyteller, was forced to move from place to place because his level of spirituality was not understood by many.

Mutwa was respected country-wide and has written books that drew strongly from African mythology.

According to Ntuli, Mutwa knew about the origins of Africans.

Ntuli said Mutwa led a very fascinating and yet extremely frustrating life. He said the late sanusi specialised in the highest form of spirituality

"It was a frustrating life because indeed many people did not understand that he was trans-journeying the real essence of what Africa is," Ntuli said.

Renowned isanusi and author Credo Mutwa has died at the age of 98.
News
1 year ago

"They burned his house and destroyed his sculptors in 1975 because of the things he was saying about Africa, now that he is dead, people are going to come out praising him.

"The department of sport, arts and culture had a legends programme and I was tasked to help rebuild his sculptures that are in different places where he lived. It was just a talk. Those things died off."

Ntuli, who is well-known for producing giant sculptures, said Mutwa had incredible knowledge about Africa and about who Africans were.

Ntuli said Mutwa also had a sense of humour. He said he once related how he predicted apartheid architect Hendrik Verwoerd's death.

"He said to him... wena uzogwazwa bese uyashona. Verwoerd laughed it off and said: 'I don't live in the township, I won't die from a knife wound'. He died of stabbed wound just like he predicted."

Ntuli said apart from Mutwa's ability to tap on the wisdom of ancestors, he was an incredible writer, and has written plays such as uNosilimela, which toured the world.

Ntuli, a trained sangoma himself, said when the late icon turned 97, they had a celebration with him.

"When we sang together with him the song hamba ntliziyo yam, uye ezulwini, ngoba akukho ukuphumula lapha emhalabeni, you could see that he came alive because we were preparing his soul to meet his ancestors," he added.

ANC national spokesperson Pule Mabe said the country had lost one of its finest sons.

"He devoted most of his energy towards preserving African culture, and challenging the tendency to relegate African cultural practices and beliefs to myths and superstitions. The once vibrant storyteller and traditional healer is respected for his role in advocating for the use of traditional medicines and discovering the origins of mankind. During his active years as a shaman (a priest of shamanism), Mutwa travelled across the country in search of hidden truths."

The ANC has mourned the passing of African philosopher, author and traditional healer  Vusamazulu Credo Mutwa, describing his death as a loss to the ...
News
1 year ago

House number 2794 Tunzi Street in Rockville is just a stone's throw from Regina Mundi Church, a majestic cathedral that became well-known as a haven ...
News
1 year ago

Agriculture plays a key role in the economic development of most countries in the world.
Business
1 year ago
Next Article