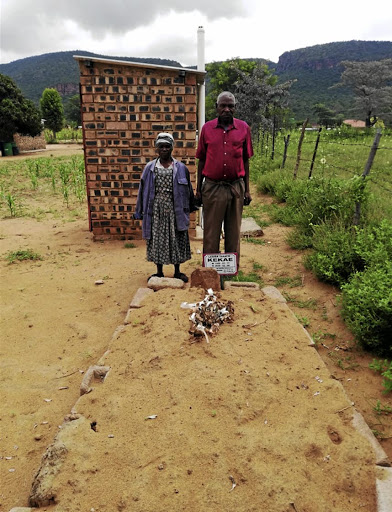 Desia Kekae and her husband Petros at the grave of their son Lesiba at Dikgokgopeng village, Limpopo. /Peter Ramothwala

The Limpopo man who was buried in his parents' backyard after his family was denied access to lay him to rest at the local cemetery two weeks ago is likely to be exhumed and reburied.

Chief Daniel Langa of the Bakenberg Royal Council said they had already contacted the relevant government departments to start the process.

Sowetan reported last week that Lesiba Kekae of Dikgokgopeng village in Bakenberg, outside Mokopane, was buried in the backyard after his family refused to pay a R1,000 fine to grave diggers before his burial.

Dikgokgopeng - and other villages in Limpopo - has a grave-diggers fraternity made up of local young men calling themselves diphiri (hyena).

Kekae's family told Sowetan they have not been informed about the exhumation.

Langa told Sowetan yesterday he had written to the departments of health and environmental affairs, informing them about the intention to exhume Kekae's body.

Family forced to bury son in their backyard

A family was forced to bury its relative in the backyard after a group of angry community members demanded it pays a R1,000 fine before it could be ...
News
2 years ago

A 21-year-old woman was arrested after she allegedly killed her two-week-old baby boy and buried him in a shallow grave in a village outside ...
News
2 years ago

"I wrote the letters to request guidance on how the process works as I prepare for meeting with the concerned community next week. We have scheduled a community meeting for March 16, where the matter will be addressed once and for all," the chief said.

He said the divided community should find a solution because no one is allowed to bury their deceased in their backyards.

Kekae's sister Merriam Mateagane said the family had not been informed about the intention to exhume her brother's body for reburial at the local cemetery.

"No one has told us anything relating to the reburial of our brother at the cemetery. I only know about the meeting scheduled for next week but we are not certain whether to attend or not as tensions are high in this community.

"Some people are saying we shouldn't attend the meeting because they [the community] are going to come armed."

Mateagane said the reburial of Kekae will take the family back to a painful and emotional moment.

Kekae's family were denied access to bury him at the cemetery after diphiri fined them for not contributing the annual R100 towards the cemetery's upkeep.

Langa confirmed that the annual fee to the grave diggers was rejected by other villagers, and that the matter has divided community members.