Rain falls — but not enough to end water rationing in Makhanda 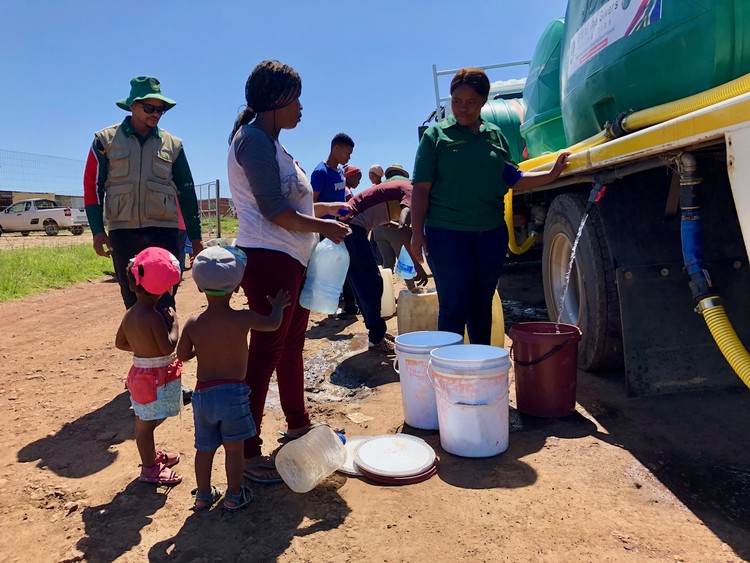 Despite the rain in January, Makhanda remains in the grip of a water crisis. Schools, businesses and local residents continue to struggle to cope with water cuts implemented by the Makana municipality.

The municipality recently started a new rotational plan to ration water for the town of more than 70,000 people. Water is cut every third day.

However, some areas report water outages at irregular times, which go on for days on end.

Hendrick Jantjies, a ward committee member from Hooggenoeg, said the water in his area is often cut for three days — sometimes a week at a time.

“It’s hard without water. You can’t use your toilet ... You can’t buy it [drinking water] when you are poor,” he said.

The Makhanda high court on Tuesday ordered the Makana municipality to be dissolved and placed under administration for violating its constitutional ...
News
2 years ago

Last year a rain tank was donated which has helped with “our survival”, he said. “We didn’t even get her name [the donor] to thank her,” said Jantjies.

Zoleka Kate, principal of Fikizolo Primary in Joza, where the taps have run dry, said: “We had tanks, but they were empty. We were trying to get water from the municipality, but they did not deliver. There were times when we had to ask parents to come fetch their children because there was no water.”

Kate said she relies on “good Samaritans” for support. The JoJo tanks at the school were donated and filled up by the Gift of the Givers, which has been organising emergency drought relief in the area since February 2019.

“With 575 pupils, you can imagine what the toilets were like,” said Kate.

The January rains have helped fill the JoJo tanks, improving the situation at the school. However, Kate said she is still trying to get funding to attach pumps from the JoJo tanks to the toilets.

Eastern Cape education spokesperson Loyiso Pulumani said the department had recommended that schools close early if they do not have water on the premises. He said schools in the area surrounding Makhanda and some in the township had been worst affected.

Water cuts have seen businesses close temporarily. Earlier in the month, the department of home affairs had to shut its doors.

Water is supplied to Makhanda through the Waainek and James Kleynhans treatment works.

The James Kleynhans treatment works, on the east side of town, receives its raw water from the Orange and Fish rivers, but its capacity is limited to 10 megalitres per day.

Waainek, on the west side of town, receives most of its water from Howieson's Poort bam, but has only eight megalitres of capacity per day.

The dam has recently risen to about 50% capacity, while the Settlers Dam is at 5%.

Both dams ran dry last year, forcing the municipality to supply water only from the James Kleynhans treatment works, which had to operate at above design capacity at 12 megalitres a day.

The daily demand of the town is 18 megalitres a day.

Makana’s newly appointed water and sanitation manager, Gubevu Maduna, said the water now in Howieson's Poort would last about two months if Waainek were to be run at full capacity.

Maduna said the municipality was launching an investigation into why the Settlers Dam is not replenishing, especially after the recent rains.

Maduna said the plan is for long-term sustainability, not immediate relief, and water rationing would continue.

Some local residents complained that the municipality had not done enough for poorer areas, leaving communities to rely on the support of Gift of the Givers and other community organisations.

Crisis could have been avoided

The municipality maintains that the water crisis was an unavoidable consequence of the extreme drought gripping the region, but Philip Machanick, chairperson of the Grahamstown Residents' Association (GRA), says the crisis could have been avoided if the 2015 planned upgrade for the James Kleynhans treatment works had been completed.

The upgrade would have doubled its pumping capacity to 20 megalitres a day. Instead, the completion date kept on being pushed back — until it became clear that the project was not going to be completed.

In 2019, when the water situation was at its worst, the provincial government intervened and brought in Amatola Water, a company which specialises in providing and managing sanitation and water supply services to municipalities, to facilitate the stalled project.

The R100m project was supposed to be finished this year but was stalled again.

Machanick said the “government promised to fast-track it” but has not done so.

Maduna said Amatola Water had left the municipality in the dark during the tender process. He said he was frustrated at how long it has taken for Amatola Water, the implementing agent for the project, to award the contract.

Amatola Water spokesperson Nosisa Songayise confirmed that the contract had finally been awarded to Mamlambo Construction in January this year, after it was put out to tender in May 2019. The project is meant to be finished by March 2021.

The failure to supply water was cited in the Unemployed People’s Movement’s successful bid to get the Makana Municipality dissolved and put under administration. The provincial government is busy appealing the ruling, which is due to be heard in the Grahamstown high court on Tuesday March 3.

On Tuesday, Judge Igna Stretch said the municipality failed to provide services to the community and was thus in breach of the constitution.
News
2 years ago

A court application to set aside art and  culture minister Nathi Mthethwa’s decision to change the name of Grahamstown to Makhanda has failed.
News
2 years ago
Next Article