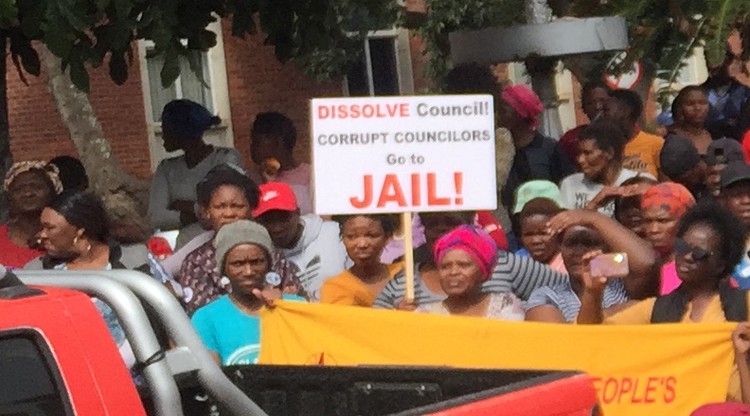 Members of the Unemployed People’s Movement protest outside the high court in Makhanda (formerly Grahamstown) in September.
Image: Lucas Nowicki/GroundUp

The Makhanda high court on Tuesday ordered the Makana municipality to be dissolved and placed under administration for violating its constitutional mandate by failing to provide basic services to the community.

The application was brought by the Unemployed People’s Movement (UPM) and other civil society organisations against the municipality, which was the first respondent, and several others in February 2019. The applicants were represented by Wheeldon, Rushmere & Cole. The case was heard in September.

The order has to be carried out by the provincial executive of the Eastern Cape, one of the respondents in the case.

A former ANC councillor in Makana Municipality in the Eastern Cape has failed in his marathon bid to be appointed as municipal manager.
News
2 years ago

On Thursday, the Makhanda (formerly Grahamstown) High Court heard an application by the Unemployed People’s Movement (UPM) to dissolve the Makana ...
News
2 years ago

Judge Igna Stretch wrote that the municipality’s conduct has been “inconsistent with the 1996 constitution of the Republic of South Africa”, breaching section 152(1) and section 153 (a) by “failing to promote a healthy and sustainable environment for the community”.

An administrator will be appointed until elections are held for a new municipal council, as stipulated in section 139(1) of the constitution. The provincial executive has to implement a recovery plan to guarantee the municipality meets its constitutional obligations.

In a statement released after the judgment, UPM chairperson Ayanda Kota said  “democracy has been served”.