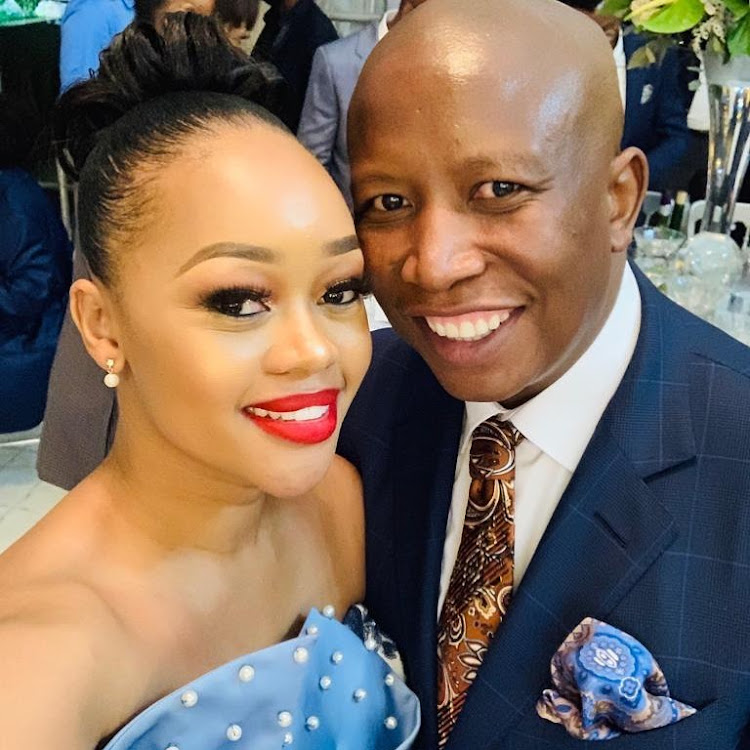 EFF leader Julius Malema's wife Mantoa on Friday accepted President Cyril Ramaphosa's apology for the allegation by ANC MP Boy Mamabolo that she was being abused.

In a letter issued by the party, Mantoa said: "Personally, I am nurturing three boys of my own, and they will grow up to become gentlemen."

"I cannot make them gentle and responsible men by concealing violence in my own home and private space. Doing so will be teaching them that violence can be tolerated.

"In order to be men who respect women and regard women as their equals, I have a duty to resist violence against my physical, mental and emotional being, both in the public and private spheres."

Referring to Ramaphosa, the ANC and parliament, she said: "It is on these grounds that I resisted abuse, even when it came from such a powerful space and party as the one you lead."

Ramphosa on Thursday apologised to Malema for Mamabolo's conduct and to South Africans for the heated exchange in parliament in which male MPs accused each other of being women abusers, saying it was unjust, unnecessary and inconsiderate to use gender-based violence to fight political battles.

Malema, who had accused Ramaphosa of abusing his late ex-wife Nomazizi, apologised on Thursday.

Early on Friday, Mamabolo apologised to Malema and his wife over his “insensitive” abuse claims.

“As a woman, I have no option, none whatsoever, but to be personally committed to the fight against abuse of women. All women are because our society gives us no other option.

"As a result, I will never let any man abuse me, neither will I ever look away when other women are abused," she said.

In her letter, Mantoa said her family was willing to put the matter aside, but highlighted that parliament should never be used to humiliate women.

“It is important to place on record that in a country where women continue to wear black outfits, either mourning the death of their girl children or in solidarity with women who are victims of gender-based violence, parliament should never be used to humiliate women, particularly using false and malicious accusations.”

Montoa added that it should never be a platform where women are a “weapon in an attempt to neutralise political opponents in a general masculine, toxic exchange."

“As I’m sure you would agree, this is an insult to women, especially those who are victims of this scourge."

She also lashed out at the way the national issue of gender-based violence was "repeatedly met with tired, meaningless and futile gestures" which are damaging at times.

"I do hope the conversation sparked by this unfortunate event will help gender-based violence to finally be met with greater and more meaningful urgency.

"We need a working plan, one that results in women being truly safe in both public and domestic spaces. One that does not require women to be in a constant fight to just be alive."

She had been responding to Ramaphosa's state of the nation address last week, when Mamabolo stood on a point of order and then directly asked the EFF leader to confirm or deny allegations that he physically abused his wife.

The Malema couple  served him with legal papers demanding an apology, or be sued for R1m.

In his apology, issued on Facebook in the early hours of Friday, Mamabolo said he questioned Malema about the abuse allegations after he received messages from “some jealous friends of Mantoa”.

“I was therefore actually wrong to raise the matter in public without consulting with you to verify these false allegations from jealous friends of Mantoa," said Mamabolo.

“The fight against femicide and gender-based violence is a fight I recommit myself to, and even after these unfortunate events, I will continue to contribute in challenging it and fighting it. My actions impugned your reputation,” Mamabolo said.