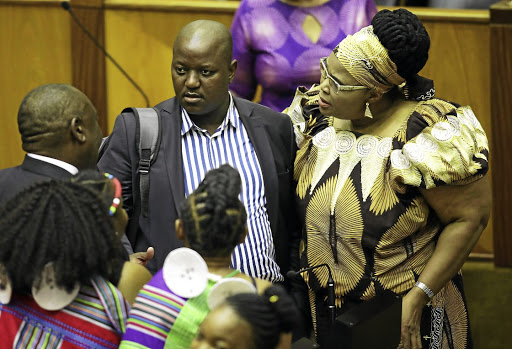 President Cyril Ramaphosa speaking to ANC MP Boy Mamabolo in parliament yesterday. Mamabolo and EFF leader Julius Malema - the Seshego homeboys and former political allies - have been at each others' throats during Sona. / ESA ALEXANDER

President Cyril Ramaphosa has apologised to EFF leader Julius Malema for allegations made by ANC MP Boy Mamabolo that he was abusing his wife, Mantoa.

Malema also offered his own apology to Ramaphosa in a statement late yesterday, saying he hoped the president together with his family would accept his apology.

Ramaphosa also apologised to South Africans for the heated exchange in which male MPs accused each other and Ramaphosa of being women abusers, saying it was unjust, unnecessary, and inconsiderate to use gender-based violence to fight political battles.

He addressed Malema towards the end of his response to the two-day state of the nation address (Sona) debate in parliament yesterday.

He called for a truce between former political allies Malema and Mamabolo.

"My heart goes out to Mantoa and your family, Honourable Malema," he said.

In his statement, Malema said he had called Ramaphosa to apologise personally.

"After a long discussion with my wife about the president's apology, I have decided to pen down the apology that I should have communicated on the plaform of the joint sitting of parliament where it belonged," he said.

Malema said if there should be evidence produced to dispute his claim that he had never laid a hand on his wife or any other woman, he would be prepared to resign as an MP and president of EFF.

"I therefore, hope that this puts the matter behind both of us," he said. "I also would like to apologise to all South Africans who were offended in the process, in particular victims of gender-based violence."

"You have raised the issue of my late former wife Nomazizi. She is not here to respond for herself," he said.

Ramaphosa said he had received a text message from a young woman who was upset at how gender-based violence was used as a political tool. "We should not resort to using issues such as these, as it was used also against you, to politicise and to trivialise an important issue that affects so many women in our country," he said.

"All of us need to engage in this struggle against GBV.

"I want to say, I am a father of daughters, I am a grandfather of granddaughters, I am a husband, I am a brother to a sister, and I also have 50% of the people in the cabinet who are women, and we also have South Africans, the majority of whom are women - and these are the people all of us must stand up and engage in the fight against GBV in our lifetime. "As we do it, we must have respect for one another and show respect for the women of our country," he said.