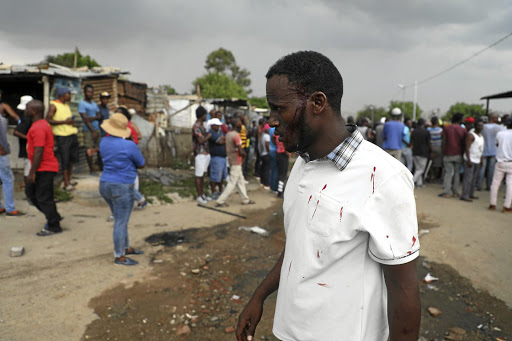 A Somali national was hit with a rock as locals tried to loot a foreign-owned shop in Diepsloot yesterday.
Image: Thulani Mbele

A family of a man who was killed, allegedly by undocumented foreign nationals, in Diepsloot, has distanced itself from the violent protest that engulfed the township yesterday.

Stanley Khoza was beaten to death in the township, north of Johannesburg, on January 12 while on his way to a tuckshop to buy a cigarette.

He left his home at around 10pm when he was attacked by unknown men in the area who assaulted him to death.

His death and that of Det- Capt Oupa Matjie sparked the protest in Diepsloot which led to a shutdown of the township as the community blamed foreign nationals of being behind the high levels of crime in the area.

His mother-in-law Meta Mosupi yesterday told Sowetan that the family did not know the identities of those who attacked her son-in-law.

"On the night he died, he left my daughter in bed to buy a cigarette. My daughter was alarmed when someone knocked on the window about 30 minutes later and told her that Stanley was lying on the ground and that he was badly injured and had been beaten up by a mob," Mosupi said.

"We don't know who killed him. Crime in this area is bad but we can't pin his death on foreign nationals. We can't say that the community is wrong, but the crime is high here," she said.

Matjie was shot and killed while in pursuit of suspects in the area last week.

Gauteng police have called for calm after disgruntled Diepsloot residents threatened to shut down the area.
News
2 years ago

A man has been arrested for the officer's murder and appeared in the Randburg magistrate's court yesterday.

Following the man's arrest, the community held a meeting on Wednesday evening and resolved to shutdown the township and rid it of undocumented foreign nationals.

They also marched to the police station and demanded to see the suspect who allegedly shot and killed Matjie.

When their request was not acceded, they took to the streets and barricaded it with burning tyres and rocks. Roads leading into the area, including William Nicol Drive and the R551, were blocked off.

Community leader Ronny Manganye claimed that 11 people have been killed since December in the area.

'From Diepsloot to the world' is Tlou Collections motto

Gauteng was bridging the performance gap between the province's rich and affluent schools and the township schools, education MEC Panyaza Lesufi said ...
News
2 years ago

An increasing number of people have sought mental health services over the past year as a result of violent crime.
News
2 years ago
Next Article