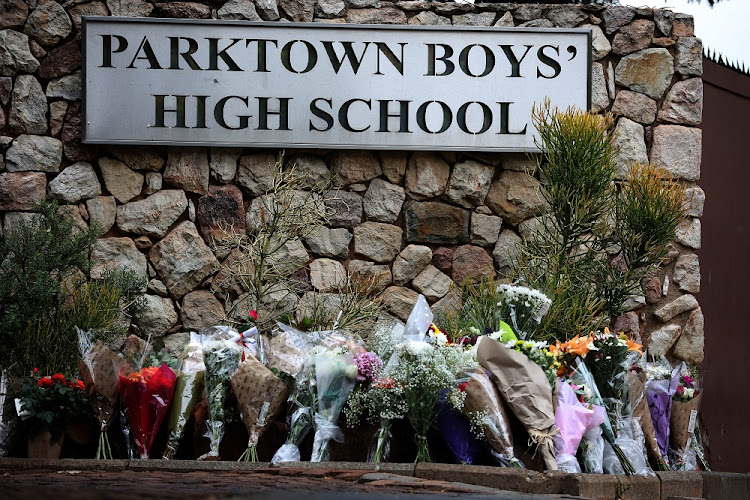 Parktown boys with flowers left by the parents and public generaly for the death of Enoch Mpianzi last week.
Image: ANTONIO MUCHAVE

It was an emotional moment as parents placed flowers outside the Parktown Boys High in Parktown,  Johannesburg,  on Monday.

Some parents could not hide their tears as they came to fetch their children. The flowers were in honour of 13-year-old Enoch Mpianzi who died during a school excurison in North West province last week.

Mpianzi was meant to start his grade 8 at the school but went missing during a camping at Nyati Bush and Riverbreak lodge last Wednesday. His body was found on Friday after he was was last seen when a makeshift raft which he and other boys were using overturned in the Crocodile River on the first day of the camp.

Minister of basic education Angie Motshekga announced on Monday morning that she had sent a school safety unit to support and collaborate with the Gauteng department of education. She said the team will also assist in ensuring that the affected families are supported in these difficult times.

Motshekga said she was deeply concerned that the first week of schooling has been marred by serious incidents that have resulted in the loss of lives.

This also included the drowning of Keamohetswe Seboko, 12, at Laerskool Bekker in Magaliesburg, western Gauteng, the stabbing of an 18-year-old pupil from Kopanelo Secondary School near Taung in North West and the drowning of a grade 11 learner from Mpolweni High near Pietermaritzburg in KZN.

Parktown Boys’ High School said it would remove all negative comments on its social media pages around the death of Enoch Mpianzi.
News
2 years ago

The tragic events surrounding schools early in the year include the murder of 53-year-old principal Emmanuel Tshivhase, who was shot outside his school Jabulile Secondary in Orange Farm, south of Johannesburg.

“We also appeal for patience, and urge members of the public to refrain from speculating, as we await the outcome of the investigations into the drowning of Enoch Mpianzi and Keamohetswe Seboko. Our prayers are with the families of the deceased learners,” said Motshekga.

The minister said the circumstances surrounding the death of learners must be thoroughly investigated in order to avoid similar occurrences in the future.

"The department would work with the affected provinces to ensure that appropriate measures are put in place to prevent unnecessary loss of life."