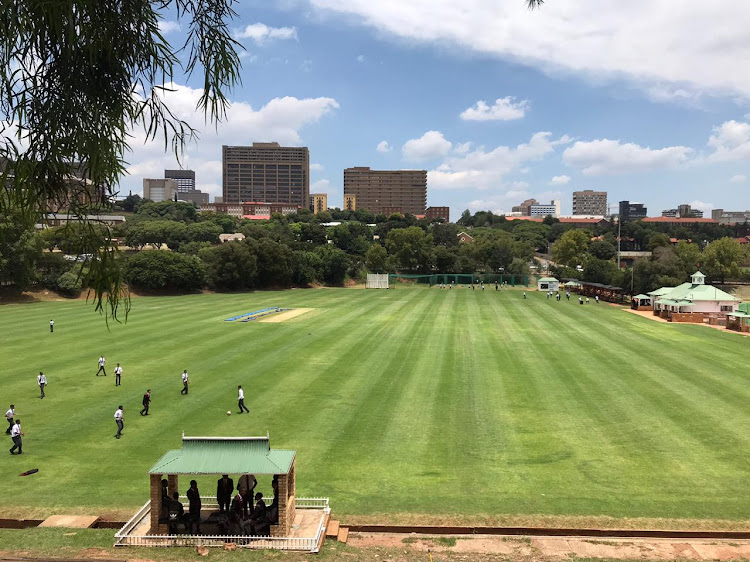 Schoolchildren kick a ball on the grounds of Parktown Boys' High School in Johannesburg on January 17 2020. Parents have expressed concern at the seeming laxity surrounding the death of a boy while on a school camp.
Image: Kgaugelo Masweneng/TimesLIVE

It appears activities may have continued as per normal on Wednesday at the Parktown Boys' orientation camp in North West after the disappearance of Enoch Mpianza.

The grade 8 pupil’s body was found on Friday morning. Police said it was believed he had landed in the Crocodile River when the home-made raft that he and other pupils were on had capsized on Wednesday.

Col Adele Myburgh said Mpianza was with a group of about 12 pupils on the raft when it overturned.

Police divers, who were part of a search team, discovered the 13-year-old's body about 9.45am on Friday, about 3km from where he was allegedly last seen on Wednesday," Myburgh said.

"Mpianzi was reported as missing on Thursday and police immediately activated a search team consisting of police divers and a dog unit, who searched until it became dark. The search continued this morning until his body was recovered.

"Initial information indicated that the boy was participating in a team-building exercise, where learners were divided into groups to build rafts and then placed them in the river, to drift about 100m-150m downstream. The current was very strong and at some stage the learners went under water as they were drifting. During roll-call by the teachers, it was realised that Mpianzi was missing," Myburgh said.

She added that a case of inquest was under investigation by police to determine the cause and circumstances surrounding the death.

“[My son] said that they went hiking in the afternoon [after Mpianza had disappeared],” said a parent of another grade 8 pupil, who said his son had shared a room with Mpianza at the camp.

“[He said] he didn’t see him [during the hike] but he didn’t think much of it,” the parent added, speaking on condition of anonymity.

“It was only when they got back to the room that it sounded an alarm that the boy had not been seen for hours,” said the father of the traumatised boy.

It was not immediately clear whether the pupils had immediately alerted the schoolteachers about Mpianza not returning to the room. 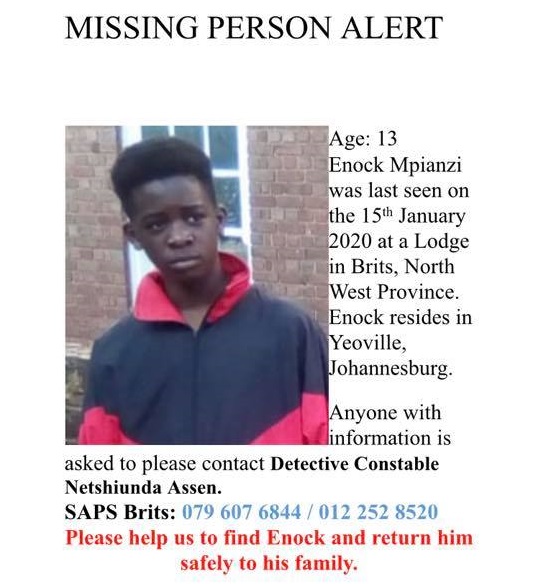 The body of Parktown Boys pupil, Enoch Mpianza was found on Friday more than a day after he disappeared from a school orientation camp.
Image: Parktown Boys' High

Gauteng education MEC Panyaza Lesufi had taken to his Twitter page on Friday to give updates on the search and rescue efforts. He said the rescue mission had been suspended on Thursday evening and resumed again on Friday. It was not immediately clear whether this meant the search for Mpianza only commenced on Thursday.

The parent who spoke to SowetanLIVE's sister publication TimesLIVE said his confidence in the school was shaken.

“We only learnt this morning about the incident. They sent communication through in the morning, hours and hours after it happened. I think this was a messed up manner of handling it,” he said.

“These things happen and no one anticipates it to get this way. But how do they not regularly check the roll to ensure all the children are there? I mean, they were new to the environment and the school,” he added.

Not all the grade 8 learners attended the camp.

Felicia Dlamini, whose child stayed behind at school, said if she could, she would take her child elsewhere. She said she regretted enrolling her 13-year-old son at the school.

“Every year the school is in the news for the wrong reasons. I’m shaking, this is bizarre. I can’t imagine what the parents are feeling,” Dlamini said.

She called the incident irresponsible and questionable.

“I already had my own issues with the school but I feel like they are negligent. How do you miss a child and only notice the next day. Did they not mark the register? I find it very irresponsible.

“I would take my child elsewhere if I could. If you take your child to such an expensive school you think they would be a little bit safer.

“A child goes missing today and only tomorrow you notice they are not there? Who’s lying here? Or they just didn’t care. If it’s happening in such places, where can we go then?”

Her child did not make the trip because she had not yet bought him uniform, she said.

“I don’t have a choice but to keep him here. It’s January so it’s a struggle to switch,” Dlamini added.

Another parent, Julia Smith, said she had the same questions as everyone else.

“We all want to know how it happened but it’s obviously easy to criticise after the fact. The safety of children is a big problem that needs to be resolved.

“I’m still processing it too, I really don’t know what to make of it,” she said.

Indemnity forms signed by the parents of the children stated that neither the school, the department of education nor the lodge where the incident occurred could be held liable for any occurrences.

This is a running story that will be updated with comment from Gauteng MEC Panyaza Lesufi.

Rescue teams will resume their search on Friday morning for a Grade 8 Parktown Boys’ High School pupil who went missing while attending an ...
News
2 years ago

Parents of some of the Grade 8 pupils from Parktown Boys High School on Friday shared how their children had also experienced difficulties at an ...
News
2 years ago
Next Article