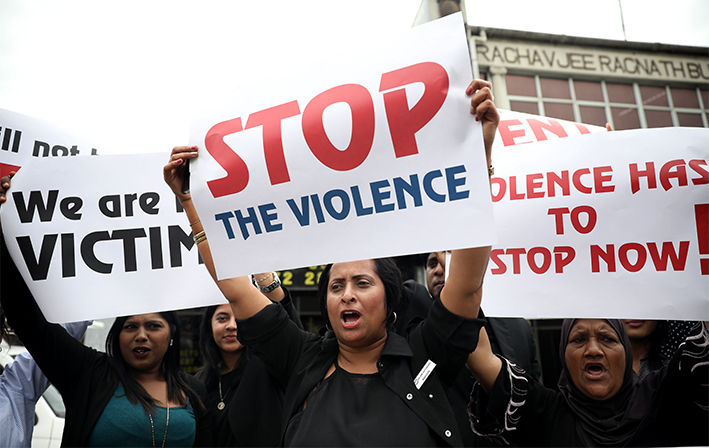 Women outside the Verulam magistrate's court on Monday during a picket in support of the 16 days of activism against the abuse of women and children. A Durban law firm has offered free legal assistance during the 16 days to women and children who have suffered abuse.
Image: Sandile Ndlovu

A Durban law firm is lending its resources to the fight against women and child abuse by offering free legal assistance during the 16 days of activism campaign.

Theasen Pillay and Associates held a picket outside the Verulam magistrate's court on Monday to commemorate the start of 16 days of activism against women and child abuse, and to offer its services.

The firm said it was providing free legal assistance to "any woman or child who has been a victim of abuse" for the next 16 days.

She said they hoped more abuse victims would come forward and make use of the legal system, especially when looking at the scourge of gender-based violence that plagued the country this year.

Gender-based violence (GBV) is often misconstrued as a scourge that targets poverty-stricken women.
News
2 years ago

"We have done it previously. The sad thing is that despite us going out there and saying, 'woman and children contact us, we will help you', only a handful of women have done so. The scourge of violence this year has been so alarming and it makes me terrified of the world I am leaving behind for my children," she said.

"We know the law and we are able to be compassionate and empathetic and move people forward. Let us provide something that is going to be useful."

At a national level, government will be convening a series of dialogues on gender-based violence and the abuse of children in order to get communities involved in the fight against abuse. Communities have been asked to wear white ribbons in solidarity with the fight against GBV.

Meanwhile, Monday also marked International Day for the Elimination of Violence against Women which is spearheaded by the United Nations. This year’s theme, "Orange the World: Generation Equality Stands against Rape", highlights the need to end rape culture. It uses the colour orange as a symbol of hope and a brighter future without violence against women.