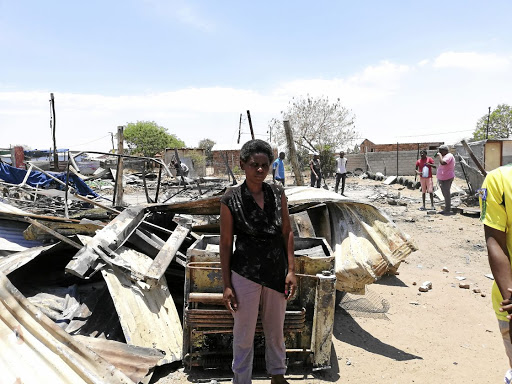 Are the police and other law-enforcement agencies keen to fight for women who are victims of other forms of GBV, such as Mpho Tshidivhi whose eight-room shack was petrol-bombed by a group of men, the writer asks.
Image: PETER RAMOTHWALA

Our story yesterday about a Polokwane woman who lost her home after it was petrol-bombed is a stark reminder of how violence against women in SA manifests itself in different ways.

The nation is more familiar with the horror of gender-based violence (GBV) through stories of men physically harming women. This form of GBV has received widespread condemnation in society and the media, with President Cyril Ramaphosa leading from the front in the fight against it.

The courts are also responding positively to the call for heavy punishment against offenders, as seen with the three life terms given to the killer of student Uyinene Mrwetyana.

The question now remains: Are the police and other law-enforcement agencies similarly keen to fight for women who are victims of other forms of GBV?

Mpho Tshidivhi's shack was burnt to the ground by a group of local men. The 43-year-old mother of seven from Juju Valley informal settlement in Seshego said her attackers claimed they were punishing her for her "noisy" tavern which operated on her property.

A Limpopo mother has been left destitute after a group of men claiming to be EFF members allegedly petrol- bombed her eight-room shack, including a ...
News
2 years ago

Though the suspects are known for being part of a self-appointed group of power brokers in the area, the police have given the usual refrain of no "arrests have been made".

In a case of this nature, more so when the victim had indicated that she knows some of her attackers, the police are expected to issue a strongly-worded statement giving hope to Tshidivhi, other vulnerable women and the community.

We see the attack on Tshidivhi as following a trend of attacks on homes headed by women.

Sowetan has over the years reported on arson attacks in rural Limpopo in which victims were women. In many cases the victims are older women, and they include a ward councillor whose home and vehicles were burnt by locals who accused her of sorcery.

SABC1's investigative show Cutting Edge has on more than one occasion looked at similar problems in rural Eastern Cape.

We hope this struggle facing women will be brought to the fore, and hopefully a national narrative will lead to police arresting offenders, leading to punishment in the courts.

The department of social development has released details of its emergency plan to address gender-based violence (GBV) in South Africa.
News
2 years ago

A non-profit organisation focused on assisting victims of gender-based violence in Diepsloot, north of Johannesburg, has received a cash injection of ...
News
2 years ago

In recent weeks, we have seen women take to the streets of SA to bring to the fore the scourge of violence against women and children.
Opinion
2 years ago
Next Article