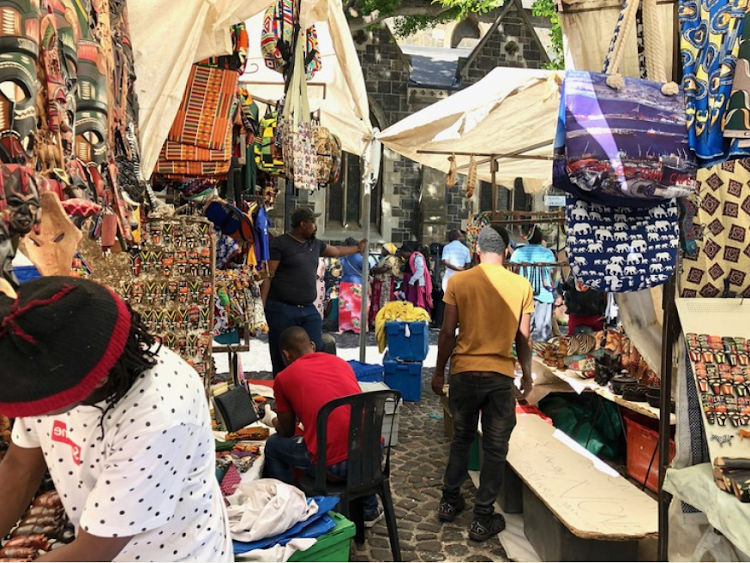 The association for traders on Greenmarket Square has asked government to resolve the refugee situation, which they say is affecting business.
Image: Madison Yauger

The letter is also addressed to the City of Cape Town, the Western Cape provincial government, the department of home affairs (DHA), the South African Human Rights Commission (SAHRC), and the Central Methodist Mission.

In the letter, the traders stated: “We are writing to you as traders who lease space from the City of Cape Town on Greenmarket Square. Many of our workers and your lessees are also refugees and asylum seekers who trade alongside people who are SA nationals and permanent residents.”

They stressed the historic importance of Greenmarket Square not only as a frequent tourist destination, but also as an iconic area of Cape Town.

Foreign nationals who have taken refuge at the Central Methodist Mission church, Cape Town have this morning attacked faith leaders who were ...
News
2 years ago

“For six weeks now there has been a protest by a fraction of the refugee and asylum-seeking community in Cape Town. Many of their grievances are valid and many of our own traders suffer the same injustices particularly from the department of home affairs. We have enormous sympathy for the most vulnerable people among the protesters,” the letter states.

However, the traders noted that the central demand of the protest leaders, to be resettled to a third country (i.e. not SA, nor the countries the refugees had fled from) as a group is “misguided and unrealistic”.

The letter said the traders understood the refugees’ need to seek shelter in the Central Methodist Mission after a “disproportionately violent eviction” from outside the UNHCR offices, but for two weeks now “the men who lead the protest have occupied the area around the church, the church itself, parts of Greenmarket Square, and the surrounding areas.

The consequences of this have been dire for our businesses and for the people inside the church, particularly the women, children and those who need care.”

The traders observed the hazards of such a large group occupying the area, such as the over-used toilet facilities around the square, the protesters’ cars displacing the taxis, which lease space from the city, the fire hazard of cooking outside the church and around the market, and the mass group of people blocking the pavement at the trading area.

The South African Human Rights Commission has slammed the “violent” attack on religious leaders at the Central Methodist Church in Cape Town.
News
2 years ago

They also noted that the women traders do not feel safe coming to work. The traders lastly acknowledged the “failure of protest leaders and education authorities to ensure that children enrolled in school attend”.

They said the consequences of these actions have caused a third of their traders to cease their businesses and those who have stayed have suffered a disruption in business, affecting their ability to pay their rent on time and in full.

The statement continues: “Our trade has been disrupted because of the failure of the state that has caused a legitimate protest with an impossible demand.”

Rev Alan Storey of the Central Methodist Mission wrote a statement on the church’s website, saying: “I also share the concern of the many traders in the area who are experiencing a loss in business, especially the traders on Greenmarket Square itself. This is another reason why a speedy solution [must] be found. These are people who themselves can least afford any loss of trade.”

Gauteng police were on high alert on Thursday after a group of 300 foreigners stormed offices of the UN High Commission for Refugees (UNHCR) in ...
News
2 years ago

Greg Wagner, spokesperson for the mayor, told GroundUp, “The mayor has received the memorandum, and has noted that some of the requests fall outside of the city’s mandate. Where the requests relate to services provided by the city, the mayor has asked that these be addressed accordingly.”

A meeting was held on Monday November 11 between the SAHRC, DHA, the United Nations High Commission for Refugees (UNHCR) and the leadership of the refugees living in the church.

About 500 refugees were removed from the UN High Commission for Refugees (UNHCR) premises in Brooklyn, Pretoria, on Thursday after being camped ...
News
2 years ago

They proposed the following:

The protest leaders turned down all offers except for assistance walking to Namibia and Malawi.

DHA spokesperson David Hlabane and SAHRC spokesperson Gushwell Brooks could not be reached for comment before publication.

An application by residents who want the high court in Pretoria to order the removal of refugees camped in Brooklyn and Waterkloof will be heard only ...
News
2 years ago

There are growing concerns among those helping the refugees living in the Central Methodist Mission (CMM) on Greenmarket Square in the centre of Cape ...
News
2 years ago

A bid by residents, who want the high court in Pretoria to order the removal of refugees from their residential areas, will continue to be heard for ...
News
2 years ago
Next Article