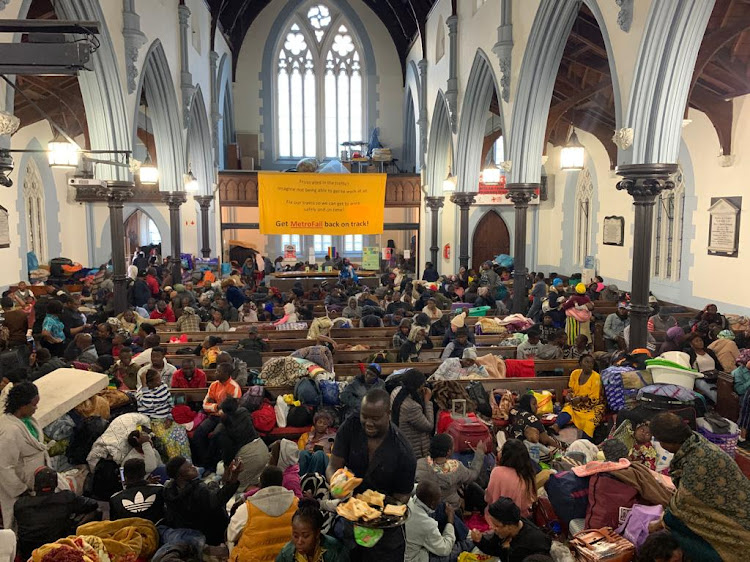 Refugees and asylum seekers poured into the Central Methodist Church in Cape Town after clashing with police on Wednesday.
Image: Sunday Times/Esa Alexander

Scores of refugees and asylum seekers evicted during a clash with police in central Cape Town on Wednesday have taken refuge at the Central Methodist Church in the city.

The church was packed in the early evening as men, women and children flooded in after being ousted from the Waldorf Arcade in St George's Mall, outside the UN High Commissioner for Refugees (UNHCR), where they had staged a sit-in since October 9.

The group, from all across Africa, have been demanding that the South African government and the UNHCR help them leave the country in the face of recent xenophobic attacks.

Congolese national Patient Kazadi said xenophobia had left him with no choice but to flee the country. “We’ve been here [outside the UNHCR] because of xenophobia in South Africa. We came to the UN to ask for our own rights. The government must send us to any other countries. They must take us out of South Africa," he said.

SA police used water cannons and made a number of arrests during an operation to disperse protesting refugees on October 30 2019. About 100 refugees and asylum seekers were arrested after staging a prolonged sit-in outside the United Nations High Commissioner for Refugees' (UNHCR) offices in Waldorf Arcade, Cape Town, police said.The foreigners have been camping outside the offices for weeks, asking to be relocated from SA, where they say they do not feel safe.The refugees want to be repatriated to their home countries or moved elsewhere, after a spate of xenophobic riots and attacks in September, which left at least 10 people dead.

"Today they sent police and law enforcement to get us out of here. There’s one woman lying down here, they didn’t even call an ambulance.”

Some protesters, including François Ngeragez, who has lived in South Africa for nine years, were affected by teargas. “I can’t see any more.  You see my eyes?  They sprayed my eyes. Why do they do this? They’re killing us like cockroaches!

“I’m a black man like them," said refugee Francois Ngeragez. "Why would they do that?” 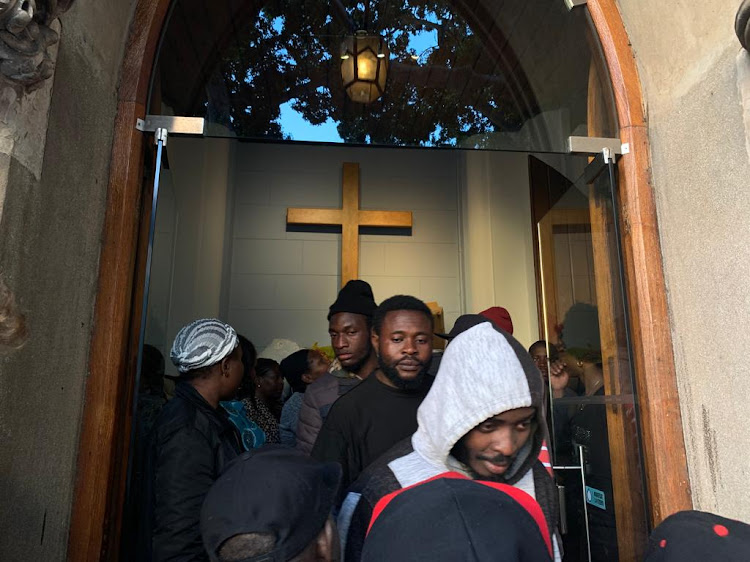 Refugees arrive at the church after being dispersed by police using a water cannon and teargas.
Image: Sunday Times/Esa Alexander

Victor, a street vendor who fled Cameroon in search of a better life - who was not camping illegally in the arcade - was caught in the midst of the standoff and quickly closed his stall.

Over the course of the last three weeks, he communicated in French with many of the protesters. “Their problem is my problem,” he said, saying that he might not have left Cameroon if he had known of the violence that would unfold in South Africa.

“I’m better living in poverty and with peace of mind than in fear,” he added.

Richard Scott, 41, who hails from the Eastern Cape but has lived in Cape Town for over 20 years, said he sympathised with the protesters.

“I’m not happy with what is happening. The way I see it, I see small children, I see the older ones. And it’s the old people who are being murdered, also. They don’t want to be running, they can’t run. The government must let them go. The government has got the money."

But he said if the government funded the relocation of foreign nationals, it could outrage South Africans who have been promised better living conditions.

“If the government gives them the money, we’re going to also complain. They promise us houses, they promise work; [we get] nothing. But if they can give the money for [them], we’re also going to cry - and then we’re going to have another strike. It’s going to be another fight.”

The Scalabrini Centre for refugees said the protesters did not necessarily represent the wider refugee and migrant community in South Africa. 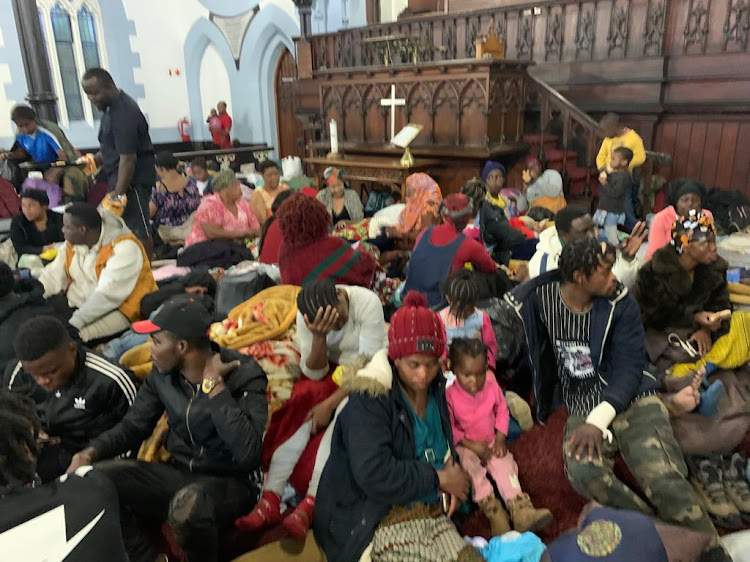 Protesters contemplate their next move as they were given food and attended to at the Central Methodist Church in Cape Town.
Image: Sunday Times/Esa Alexander

The centre told TimesLIVE on Wednesday that police had provided "ample warning" for the crowd to disperse prior to launching the eviction.

“We deplore any violence, but we witnessed the protesters being provided with ample warning to leave the area – especially those mothers with children," said the centre.

“The protesters demand the UNHCR to resettle them to a third country – but the UNHCR has repeatedly made clear that this is not – and will not be – a solution. The UNHCR even indicated this to the protesters prior to the start of the protest.

“Several alternative offers of assistance have been provided to the protesters, which they have refused - including from the South African Human Rights Commission.

A carer and her four co-accused appeared in the Port Elizabeth magistrate's court on Tuesday in connection with the murder of two elderly women at a ...
News
2 years ago

Four released on bail after arrest.
News
2 years ago
Next Article