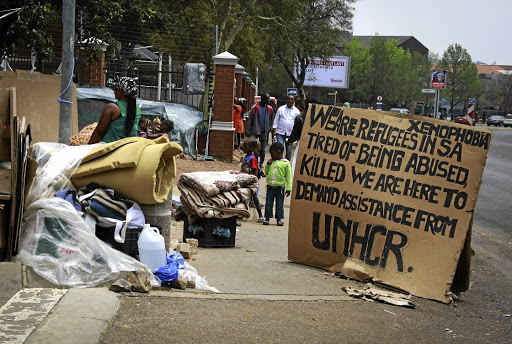 Refugees, asylum seekers and migrants camp outside the UNHCR office in Pretoria. They survive on handouts from strangers.
Image: Sebabatso Mosamo

Gauteng police were on high alert on Thursday after a group of 300 foreigners stormed offices of the UN High Commission for Refugees (UNHCR) in Brooklyn, Pretoria.

The group is demanding to be moved to other countries because they fear xenophobic attacks in SA.

Police were called to intervene after the high court ordered the group to leave the area within three days of notice of the order having been affected. The order was made on Wednesday.

Foreigners had been camping outside the offices since October 7.

“We need our rights. South Africa, xenophobia,” the group could be heard chanting outside the gate at the commission.

Among those chanting were men, women and young children, who had their possessions with them.

A fence at the @TurkishEmbPTA in Pretoria was broken by refugees earlier today. They have now moved into the @UNHCRROSA premises. Police are on the scene. The High Court ordered yesterday they must leave the area. pic.twitter.com/qSzDba1e5z

One of the refugees, Alex Mangonkoy, said they had been calling on the commission to exercise its mandate of protecting refugees.

“We are running away from xenophobic attacks in the communities. As we are here outside the UNHCR office, they gave us a court order to evict us in three days … the mandate of the UNHCR is to protect refugees, we are not violent people, we are very calm and very peaceful people,” he said.

Chaotic scenes unfolded as the group stormed the premises and some jumped the fence as police blocked them.

However, Gauteng SAPS spokesperson Brig Mathapelo Peters said no incidents had been reported and no arrests had been made.

She said police were monitoring the situation.

Mangonkoy said refugees in SA were not safe and he hoped the decision to enter the UN premises would spark a debate in the international community.

“We need UNHCR to protect refugees. We don’t want to be in SA, we want to vacate South Africa, because in this country, brothers and sisters, there is too much xenophobic attacks. We are not safe in South Africa, we need the international community to stand for this matter. Refugees in SA die like cockroaches,” he said.

The group vowed not to leave the premises, despite a heavy police presence at the commission.

“If the police want to come in, they have to come in with the coffins,” added Mangonkoy.

Scores of refugees and asylum seekers evicted during a clash with police in central Cape Town on Wednesday have taken refuge at the Central Methodist ...
News
2 years ago
Next Article