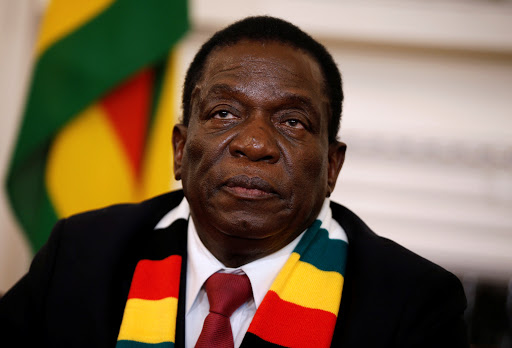 Zimbabwe President has been drawn into a child custody battle pitting flamboyant Sandton businessman Frank Buyanga and his former girlfriend.

This week, Emmerson Mnangagwa and his family made international headlines after it emerged that Buyanga’s ex girlfriend had sought their influence in dealing with the businessman.

Zimbabwean media have been awash with reports that the businessman's former girlfriend Chantelle Muteswa had sought the intervention of Mnangagwa, in a bid to retrieve the boy, who is understood to presently live in South Africa with Buyanga.

However, when reached by SowetanLIVE to clarify, Mnangagwa’s spokesperson Nick Mangwana ridiculed Muteswa’s demands to his boss.

“The President does not interfere in any legal cases be they civil, criminal or domestic. If there is alleged impropriety by any institutions then there are structures in place to deal with those. Only in the unlikely event of a whole system failing can the President intervene and only to ensure that our institutions that promote accountability do their work”

Efforts to get comment from Buyanga by SowetanLIVE were unsuccessful. Buyanga, who has been living in South Africa for almost 20-years, was granted custody of the child as an interim relief after a bruising court battle.

Muteswa is understood to have begged Mnangagwa to intervene in the former couple's bitter child custody battle, after opening a case of alleged corruption in Harare.

The Zimbabwe Anti-Corruption Commission (ZACC) on Monday detained and charged a cabinet minister and long-time ally of President Emmerson Mnangagwa ...
News
2 years ago

Muteswa claims the flamboyant millionaire has influence over judges, and she alleges he is corrupting the judiciary. This allegation was denied by Buyanga’s lawyers.

Her lawyer, Munyaradzi Bwanya also said the woman alleges that Buyanga took the child outside Zimbabwe without a passport, in direct contravention of an initial court order that had barred the businessman from traveling with the child, which he successfully appealed.

She claims someone in the police was hindering the investigation, and as a result, she had resorted to seeking Mnangangwa's and the Zimbabwe Anti-Corruption Commission (Zacc)’s intervention.

The latest chapter in the saga comes days after the leaking of an audio recording, purported to be of  that country's first lady Auxillia Mnangagwa and her son Collins. The two are said to be discussing among other things, the fact that Muteswa was in a relationship with Collins Mnangagwa.

'Corruption is no laughing matter; it destroys nations': Strive Masiyiwa

Those found to have let us down must be punished, says the businessman
News
2 years ago

According to NewZimbabwe.com, although Muteswa’s lawyer, Bwanya had confirmed that his client had resorted to seeking Mnangagwa’s assistance 'in a desperate bid to get her child back', she was not in a relationship with President Mnangangwa's son.

"Chantelle is a mother in pain, who is desperate to get her child back. She sought help from the President to stop the corruption at the Judicial Services Commission (JSC),” Bwanya said.

“She is doing what any mother in her position would have done. No mother wants to be separated from her four year-old son in that manner,” said Bwanya.

Buyanga has allowed the mother of his child only supervised visits, arguing the woman was unable to provide decent accommodation for their son since her father, with whom she stays, had been evicted from the house they used to stay in.

*This is a developing story.

Zimbabwe's President Emmerson Mnangagwa on Friday described Western sanctions as a "cancer" sapping the economy, and his supporters denounced the ...
News
2 years ago

The price of bread, Zimbabwe's second most-consumed staple, jumped 60% overnight due to escalating costs of production, the national bakers' ...
News
2 years ago
Next Article